Accessory maker Belkin has just announced the latest additions to its device protection collection, including a new Screenforce TemperedCurve 2-in-1 Treated Screen Protector and Bumper for Apple Watch, and some new magnetic cases for the iPhone 13 series. 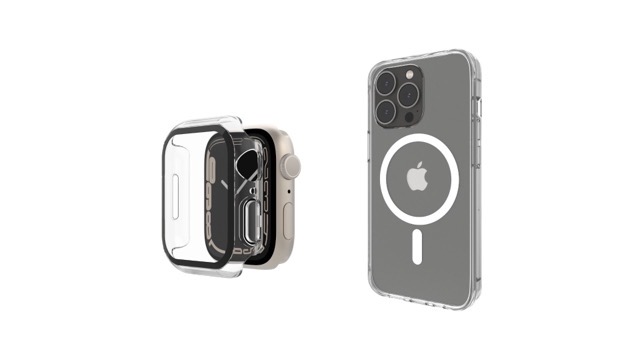 The new TemperedCurve 2-in-1 hybrid screen protector and bumper brings edge-to-edge protection for the Apple Watch and is compatible with Apple Watch 40mm Series 4 through the latest Series 7.

The polycarbonate bumper protects the edges of the watch from scrapes and scuffs, while the protector is engineered from high-quality Japanese glass to absorb impact and prevent scratches to the screen. The intelligent glass composition acts like the original screen for precise touch sensitivity.

Available in Black and Clear color options, it can be ordered for US $29.99 via Amazon and select retailers worldwide.

The new cases are available to order now for US $29.99 via Amazon and select retailers worldwide.

Apple was granted a new patent, titled "Temperature gradient sensing in portable electronic devices," on Tuesday that hints at a new temperature sensor for the Apple Watch Series 8 and details how the company's implementation could potentially work (via MyHealthyApple). The Cupertino, California-based tech giant is expected to unveil three new Apple Watch models at...
Nehal Malik
3 days ago

According to Apple leaker ShrimpApplePro, the standard 41mm and 45mm Apple Watch Series 8 models will keep the same design as last year's Apple Watch Series 7 (via MacRumors). The tipster has been gaining notoriety for accurate leaks ever since they were first on the scene to report that some iPhone 14 models would get...
Nehal Malik
1 week ago

In this week's edition of his Power On newsletter, Bloomberg‘s Mark Gurman shared more details about the higher-end Apple Watch "Pro" he expects Apple to unveil later this year alongside the Apple Watch Series 8. Gurman has detailed several features of the premium Apple Watch until now, including a larger, more shatter-resistant screen, an all-metal chassis possibly...
Nehal Malik
3 weeks ago