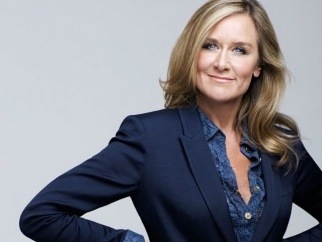 During its earnings call last week, Apple CEO Tim Cook confirmed that Burberry CEO Angela Ahrendts will be leaving her company this week to join Apple as its head of retail. Ahrendts’s achievements have been well publicized, but less is known about her early life and business and life philosophies.

A lengthy article from CNET details some of these characteristics. Ahrendts was born in 1960 in New Palestine, Indiana, where she was one of six children. From an early age she was tremendously interested in fashion. After graduating from Ball State University she moved to New York to pursue her dream job of working in the fashion industry, getting her start as a bra maker at Warnaco.

After several more positions in the fashion industry she became executive vice president at Liz Clairborne and then finally landed a job at Burberry, where she is credited with reviving the company and restoring its image.

“Think of energy almost like emotional electricity. It has a powerful way of uniting ordinary people, their connected spirit, to do extraordinary things.”

Ahrendts’ management style is very personable, keeping in touch with her employees by travelling to retail store locations and constantly communicating with them via email. The report outlines that she shows compassion towards others, humility, and constantly works hard, which are her keys to success. It is expected that she will bring this human touch to Apple’s executive team, allowing their to be a greater balance within the company.

“Technology has given us access to the world and its sea of content, allowing us to never speak to another person if we don’t want to,” she said. “Computers and smart devices are among the greatest intellectual gifts ever created for man, but if not balanced with human contact, may offer little to develop ones heart. Don’t get me wrong, I am mesmerized by this Digital Tsunami, but Google doesn’t have all the answers, and are all those people on Facebook truly your friends?”


The Burberry CEO will be joining Apple at a time when retail sales are flatter than normal. Analysts predict that she will bring her luxury flair and personal management style to Apple’s retail team.

Apple confirmed that it will continue to invest in retail stores in 2014. The company currently has retail stores in over 15 countries, allowing them to serve customers worldwide with their high quality customer service.