The cellular versions of the newly released iPad Air 2 and iPad mini 3 devices will arrive with a preinstalled “Apple SIM”, which will allow users to choose plans from carriers in the US and the UK without needing to physically remove and swap multiple SIMs when switching between carriers. However, EE is the only carrier among dozens of Apple’s wireless partners in Europe, who has signed up to offer its services to Apple’s universal SIM, while others are sitting it out, The Wall Street Journal reports. 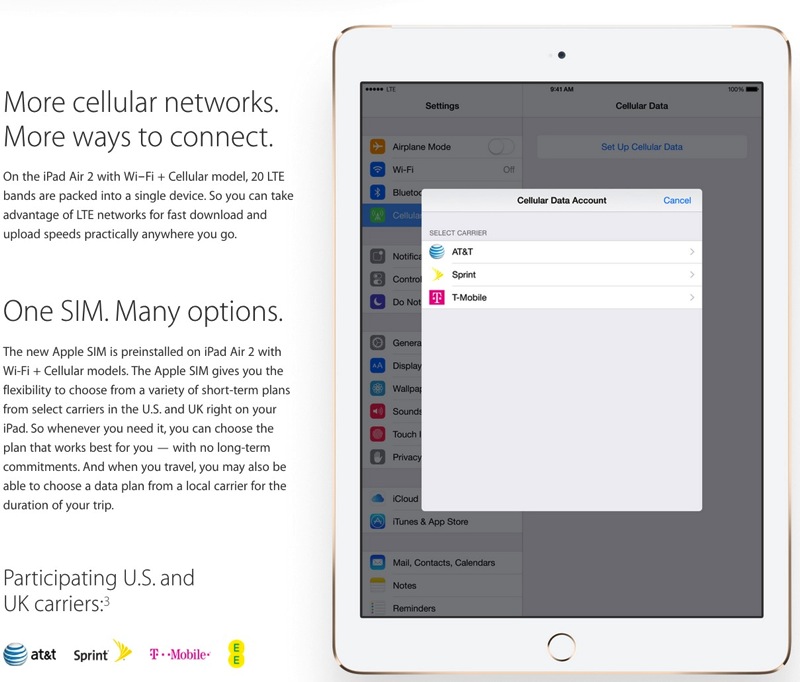 Apple notes that with the new Apple SIM, users can simply pick a new carrier through the device’s on-screen settings. This also frees up consumers to pick and choose carriers based on price, service, signal strength or any other preference. However, Vodafone in the U.K., the world’s second-largest wireless group after China Mobile, has announced it will be selling the iPad Air 2 with its own SIM cards and data plans. Similarly, AT&T in the U.S. has said it will lock the Apple SIM to its network if the user chooses the carrier.

“A Vodafone spokesperson said the company is working with both industry and the GSMA, an association of mobile operators, to develop “global standards” for “interoperable SIMs.” In France, Orange cited security concerns for not signing up with Apple, “at this stage.”

And in Germany, Deutsche Telekom has not signed on to the service, and wouldn’t comment on it.  Deutsche Telekom said it has discussed the matter within the GSMA, but declined to elaborate on these discussions. Telefónica’s German unit said it is undecided. “We will analyze how the Apple SIM fits into the price and product strategy in the weeks to come,” said a spokesperson.”

An Apple spokeswoman said that Apple SIM is only currently available in the U.S. and U.K, and that she had no information about future carrier partnerships, which according to Apple are “subject to change.”

Would you like to see the Big 3 embrace the Apple SIM once it is introduced in Canada?