The National, the flagship newscast of CBC News, released a segment last night called “Attacking the Apple empire,” an 18-minute investigative segment where it dived into the iPhone maker’s “controversial business practices including allegations of overpriced repair charges and the battery/slowdown scandal.” 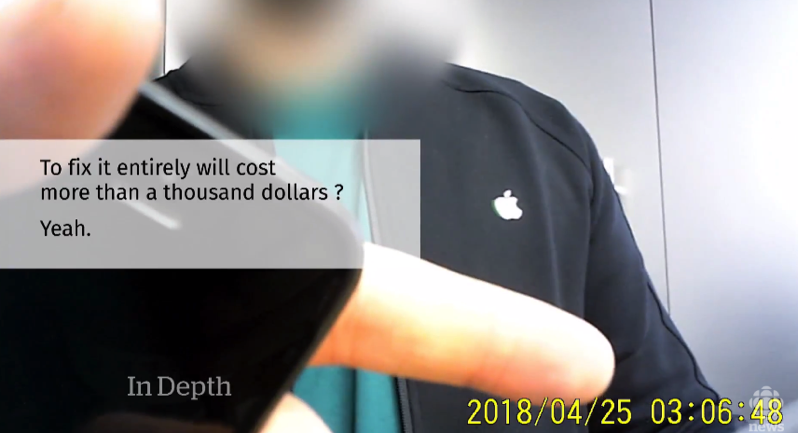 The documentary starts off by going undercover to an Apple Store in Toronto, to see what Genius Bar would say to repair a MacBook Pro with a screen that wasn’t working. The Apple employee said it would cost $1200.

Apple declined to speak on camera, but did issue a statement to say customers are best served by “certified experts using genuine parts.”

When The National then takes the MacBook Pro to a well-known third-party repair shop in New York City, Rossman Repair Group, the latter was able to fix the computer in under two minutes. Turns out, a single pin from the cable to connect the LCD backlight was damaged. It was re-aligned and then the screen turned back on again.

The National then also travels to iFixit in California and interviews founder Kyle Weins, and discusses American Right to Repair legislation. They take apart an iPhone 8 and its glued battery, plus discuss Apple’s proprietary pentalobe screw.

From there, the investigation also speaks with Toronto’s John Poole, the founder of Geekbench, who unearthed Apple’s iPhone throttling of older devices, in order to prevent shutdowns.

Next, The National also shares some footage of Apple’s appearance at a Parliamentary Committee Hearing on the iPhone slowdown incident in March, when an Apple Canada lawyer came under fire from Members of Parliament over its practices.

MP Nathaniel Erskine-Smith repeatedly asks the Apple lawyer “was the non-disclosure non-intentional or was it inadvertent?” Apple responded to say it was “non-intentional”.

Check out the full segment from The National below:

What have your experiences been when it comes to Apple repairs from the company?