Researchers have uncovered a devastating new ‘text bomb’ called ChaiOS, that is being used by hackers to crash iPhones, iPads and Macs with a single link, The Daily Mail is reporting. The hack, which can also delete all your messages, works by sending iOS devices and Mac computers into a frenzy after a malicious web address is opened in the Message app. 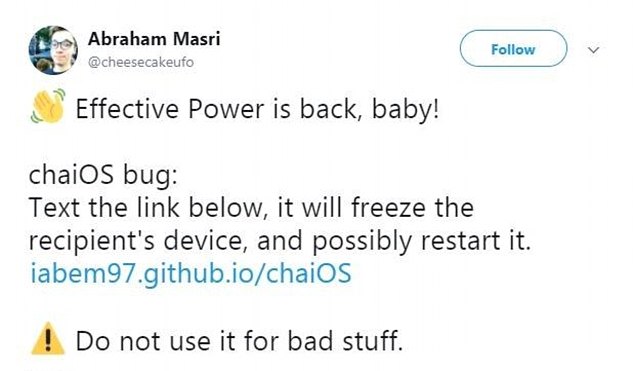 Discovered by Chicago-based software developer Abraham Masri, the flaw redirects the Messages app to a page stored on Github, a hosting service for computer code, which exploits the bug. It does so through massively long strings of text information, which overloads the system.

Masri wrote a warning to accompany the link he shared on Twitter, ‘do not use it for bad stuff’, but it is likely that pranksters and others will make use of the code for malicious purposes.

‘Ashamed about the mess it gets itself in, Messages decides the least embarrassing thing to do is to crash. ‘Nasty. But, thankfully, more of a nuisance than something that will lead to data being stolen from your computer or a malicious hacker being able to access your files.

‘Please don’t be tempted to try the text bomb attack out on anyone else – you’re not being funny, you’re just being a jerk.’

Affected devices are said to experience freezing, crashes, restarts and resprings, a process which takes about 10 seconds and returns you to the Lock Screen. A fix for the issue, which is not the first text bomb to hit Apple, has not yet been created but is expected in future updates.