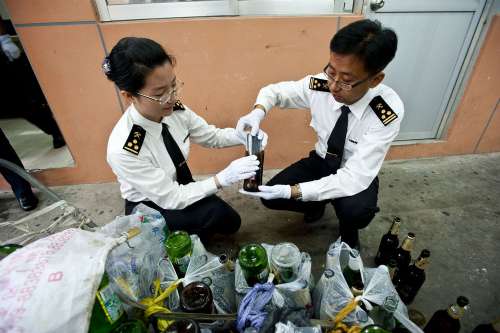 According to a report by The Wall Street Journal, school kids as young as 10-years-old are being used to smuggle iPhones and other electronic gadgets from Hong Kong into China. Over 30 cases have been busted this year alone by Chinese customs officials in which schoolchildren were drafted to carry bags of electronics and other luxury goods across the border from Hong Kong.

“The Hong Kong-Shenzhen border is among the busiest border crossings in the world. In previous years, smugglers have tried any number of inventive ways to take advantage of Hong Kong’s comparatively cheaper luxury pricing to shuttle goods undetected to the bordering Chinese city of Shenzhen. Some have hidden iPhones in beer bottles, while others have constructed multiple underground tunnels, complete with pulley systems for moving contraband. With such a porous border, some smugglers have been known to cross the border as many as 50 times a day.”

During the Easter holidays on Saturday, customs officers caught five cases where electronic devices were being smuggled inside students’ backpacks. These devices included four iPhone 5s handsets, four iPads, eight Samsung Galaxy smartphones and 50 gaming CDs. “This obviously wasn’t stuff that should be inside schoolkids’ backpacks,” a Hong Kong newspaper Guangzhou Daily quoted one customs official as saying. According to the paper, such students were threatened by smugglers into loading up their bags.

The report adds that some contraband seized from children who were 10 years old on average, has also included birds’ nests, a luxury good often favored by mainland shoppers making trips to Hong Kong.