Chinese clone specialist company GooPhone, that recently released the GooPhone i5 which runs a heavily skinned version of Android 4.1 to make it look like iOS, has now released the “i5S” even before the official iPhone 5S launch, notes CultOfMac. The cheap knockoff looks identical to the real iPhone (see video below), and you’ll only notice the difference once you start using it. 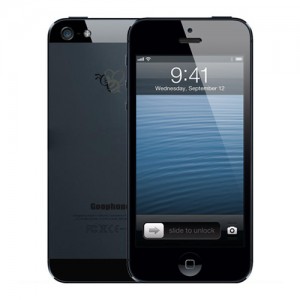 The iPhone 5S knockoff is also powered by Android 4.1 Jelly Bean, which is once again heavily skinned to look like iOS 6. Of course the performance is no way near the official iPhone. Looking at the video, you’ll notice the i5S isn’t as smooth as a real iPhone and there’s a significant lag if you use it too quickly.

The i5S has a 1.GHz Mediatek MT6577 processor under the hood, with 512MB of RAM — which is likely to be why it’s a little slow at times. It also has a 4-inch “Retina” display, which uses the same widescreen resolution as Apple’s real iPhone 5, a 5-megapixel rear-facing camera, and a 1.3-megapixel front-facing camera.

While it may be slow, the i5S does have one advantage of Apple’s device, and that’s its price tag. The first 1,000 customers will pay just $99 for the device when it goes on sale tomorrow, and it’ll be priced at just $149 after that.

If you’re interested, the product is selling online at this link.