The latest study by Forrester Research has proclaimed CIBC as the top Canadian financial institution when it comes to mobile banking, as noted in the 2014 Canadian Mobile Banking Functionality Benchmark report, which examined over 35 criteria across the ‘Big 5’ banks.

CIBC was praised for its “best-in-class” transactional features including the following:

In CIBC’s press release, they were quick to tout their firsts when it comes to mobile banking:

“CIBC was first to market with a mobile banking app in 2010 and we’ve been innovating to meet client needs through their mobile device ever since,” said David Williamson, Senior Executive Vice President and Group Head, Retail and Business Banking, CIBC. “We believe this recognition from Forrester speaks to our commitment to ensure our clients can bank where, when, and how they want.”

CIBC notes the adoption rate of mobile banking has exceeded that of online banking from the 1990s, a sign banking while on the go has become popular. 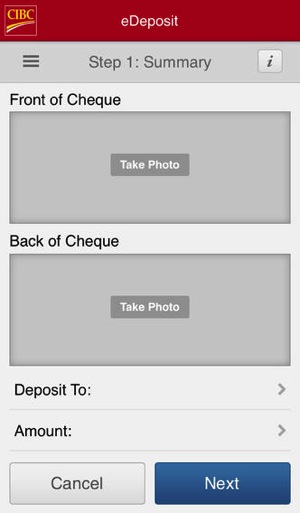 Earlier this week, NCR data reported Canadians had made over 1 million photo chequing deposits since last year, and similarly ranked CIBC as one of the banks leading the way.

Are you depositing cheques with the CIBC Mobile Banking iOS app?