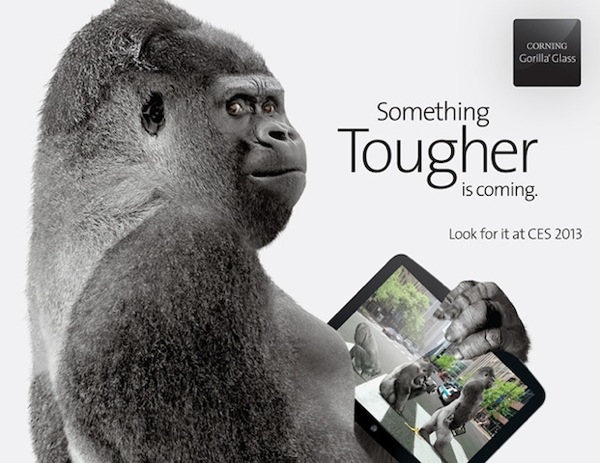 Corning has announced it will debut its Gorilla Glass 3 at CES 2013. The new glass will be even more durable and according to Engadget, the glass will feature a proprietary technology called Native Damage Resistance (NDR) that will reduce flaws, scratches and have overall improved strength:

GG3 claims a three-fold improvement in scratch resistance, 40 percent reduction in the number of visible scratches and 50 percent boost in retained strength after the glass becomes flawed.

Once CES 2013 launches, expect some hands-on videos of Gorilla Glass 3 from the Corning booth, like we saw last year with Gorilla Glass 2.

The Kentucky-based company’s glass technology played an important part as Steve Jobs called upon them to create a new product for the original iPhone. John Seeley Brown was Jobs’ friend and on the Corning Glass board. He told Steve to call up Corning CEO Wendell Weeks to see what he could do for Apple.

Weeks told Jobs of ‘Gorilla Glass’ which was from a 1960s chemical exchange process the company created but never had a market for, so it was ditched. Jobs eventually managed to get Weeks and the Corning team to create a new glass using the process for the 2007 iPhone in under six months:

It wasn’t until March of last year did Apple admit publicly Corning Gorilla Glass was used in the iPhone.