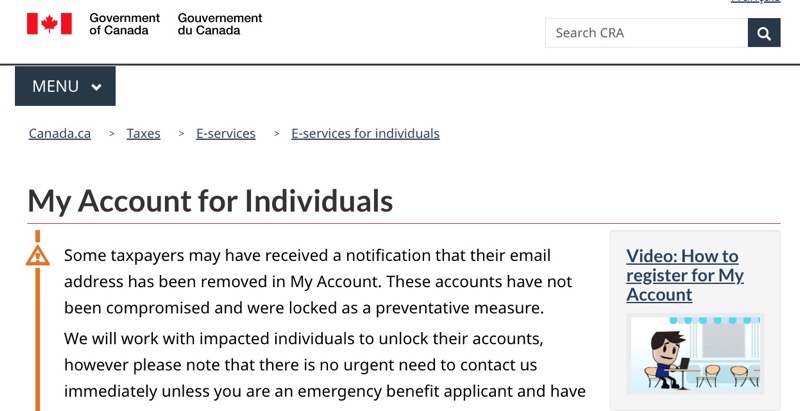 Earlier this week, thousands of Canadians received cryptic emails from the Canada Revenue Agency, indicating their accounts had been locked, worrying recipients of the notice.

Now the CRA informs the National Post the locking of over 100,000 accounts was made, because these logins and passwords were found on the dark web, an anonymous part of the internet accessible via specific software, that has a criminal side to it.

“To be clear, these accounts were not impacted by a cyber attack at the CRA. These accounts have not been compromised and the action taken to lock the accounts was a preventative measure,” said CRA spokesperson Christopher Doody in a statement to the Post.

“In this particular case, an internal analysis revealed evidence that some account credentials (i.e. user IDs and passwords) may have been compromised, and may be available for use by unauthorized individuals,” explained Doody.

These leaked credentials meant if purchased, hackers or criminals could gain access to MyCRA accounts and view sensitive information on Canadians.

Many users took to Twitter on February 16, the date the email was sent out, to find out more information about the notice:

I tried to log into myCRA but then it said I could not proceed. Error ERR.021

Can't get through on

I received an email today saying they have taken my email off of mycra. Went to log in – lets me log in, but when I attempt to go to the next page, I get error codes. Something is up with them.

I just spoke to the hubby he said the same thing about receiving that email, He now worried someone is trying to use his name to collect Cerb.

I got an email yesterday saying my email had been removed. My account had been locked for about a week prior, as far as I can tell. Worrisome to say the least.

“We will work with impacted individuals to re-establish their credentials and unlock their accounts. There is no urgent need for taxpayers to contact us imminently unless they are an emergency benefit applicant and have active applications in our system,” said the CRA spokesperson.

If you’re not using a password manager to create new passwords for all your online accounts, we highly recommend 1Password. You can easily create and keep track of logins, credit cards and more, with options to store your data in iCloud.