A recent class action lawsuit involving CRT (cathode ray tube) products (TVs, computer monitors, etc.) purchased between 1995-2007 was approved by courts, with the settlement payout at $49.8 million. The lawsuit was regarding alleged price fixing by numerous companies in Canada, including Samsung, Panasonic, Toshiba and more:

Class actions were commenced in Canada alleging that the Defendants unlawfully conspired to fix prices for CRTs and CRT Products. CRTs were commonly used in televisions and computer monitors. CRTs have now largely been replaced by flat-panel technology, including LCDs and plasmas.

“The court-approved protocol we are announcing today will allow eligible Canadians to recover money they should have never been charged in the first place,” said Linda Visser of LLP Siskinds, to CTV News.

Late last week, the Canadian class action lawsuit was approved by the courts. Any Canadian who made a CRT product purchase can file a claim, regardless whether they have a receipt or not. The minimum payout is $20, sent via e-Transfer. The information required is your name, phone number, email and mailing address.

The defendants and settlement amounts are listed below. Samsung SDI paid the most at nearly $17 million: 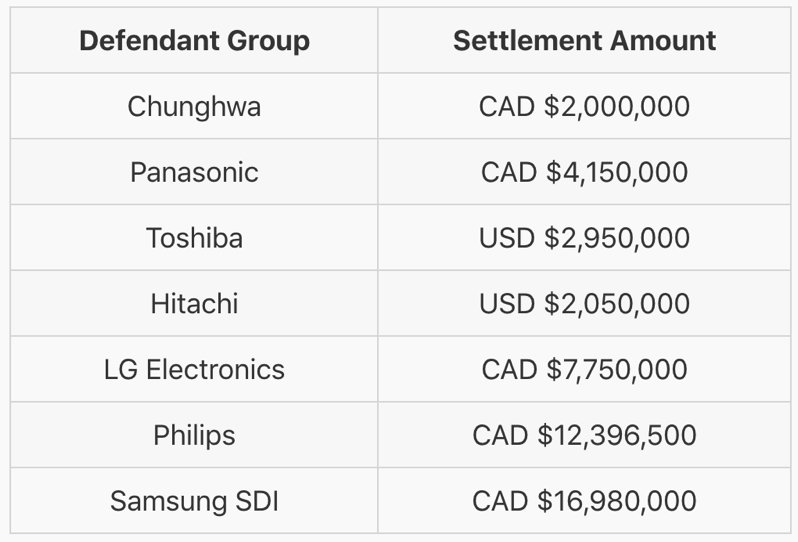 These defendants have not admitted to any wrongdoing or liability, but have agreed to pay the amounts listed above. The class action lawsuit was launched back in 2008 and settled a decade later.

Canadians have until March 1, 2019, to file a claim online. You can do so by clicking here.