The City of Cupertino has extensive links to former Apple CEO, Steve Jobs. He grew up in the area, and also started his journey with Apple there. Steve Jobs put Cupertino on the map, and more recently,Â appeared on surprise notice to present a proposal for Apple’s new massive ‘spaceship’ campus to the city council.

When your largest taxpayer’s CEO comes in person to ask for permission to build a new campus, how the heck can you say no? Further details were revealed about this mega campus (capable of holding 13,000 employees) and it appears the city has started to consult with the public over this project, as part of its initial review process.

The City of Cupertino has scheduled a public meeting to generate questions over the environmental impact of the new Apple campus. The Environmental Impact Report Scoping Session Apple Campus 2 Project is set for Thursday, September 8th, 2011, from 6:30-8:30pm, at the Cupertino Community Hall. The meeting is part of the environmental review process and will also be broadcast live at www.cupertino.org/webcast. 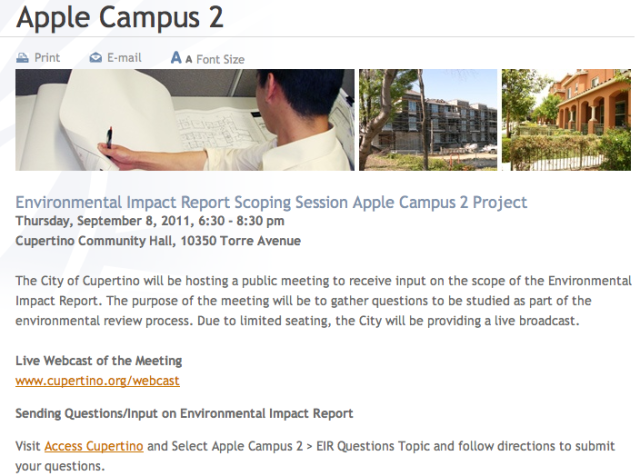 The Environmental Impact of the Campus? It’ll Be Greener Than Ever

Apple’s detailed landscaping plans show an existing 4506 trees in the project area, with 3451 to be removed due to either poor health, or for the construction of the new campus buildings. But once Apple’s campus is completed, the proposal shows a total of 6000 trees to be present, ranging from oaks, pines, maples, and even orchard trees.

Apple is taking this job seriously, as they have hired a senior arborist from Stanford to assist. Parking lots will be underground and out of view. Essentially, this is going to be one giant park, with a futuristic building in the centre. 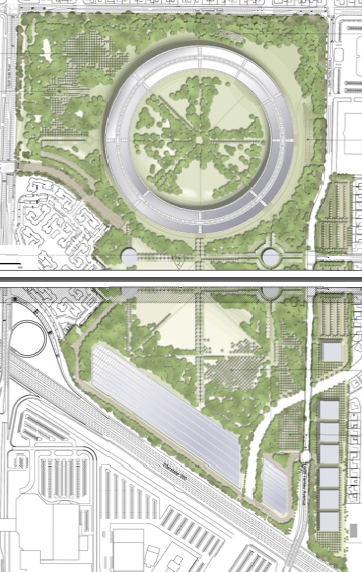 Could Chairman Jobs show up at this meeting? You’ll have to either attend the meeting, or watch the webcast to find out.