The Dark Sky weather app launched in the App Store nearly four years ago, showing gloriously rendered maps of weather movement. Now, the app has evolved into a standalone website, offering some of the most beautiful weather animations available on the internet (via Wired). “We really needed that companion website to Dark Sky,” says Dark Sky co-Founder Adam Grossman. “If you’re on your desktop, maybe you don’t want to pull the phone out of your pocket.” 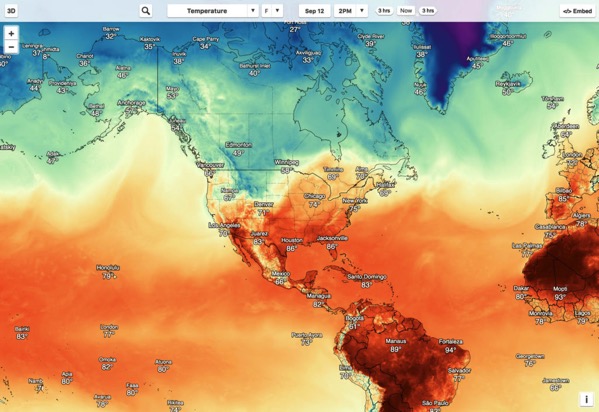 The website offers pretty much the same information you get on your iOS device. The temperature is shown boldly at the top of the page, accompanied by other details like wind, humidity, barometric pressure, as well as a 24-hour forecast. Scroll down and you’ll see the weekly forecast, where you can expand each day to get an hourly breakdown of temperature and precipitation.

“The Dark Sky site’s maps are situationally aware. If you head there on a potentially snowy day, for instance, it will automatically know to serve you an accumulation map. Even the precipitation maps have gotten more refined. If it’s going to rain soon, you’ll get a detailed radar view. If there’s rain nearby potentially heading your way, Dark Sky will load a bigger picture view”.

While speaking to The Verge, CEO of Epic Games Tim Sweeney has said that Apple’s ability to reject apps like Twitter is something “every politician should fear,” no matter what side of the aisle they’re on. “I think it’s incredibly dangerous to allow the world’s most powerful corporation to decide who is allowed to say...
Usman Qureshi
9 mins ago

Apple supplier Foxconn has invested $500 million USD in its Indian subsidiary to increase its production capacity in the country, according to documents filed in the Taiwan Stock Exchange (via South China Morning Post). The move comes as Apple urges its partners to accelerate plans to diversify the iPhone maker's supply chain beyond China. Foxconn...
Nehal Malik
16 mins ago