After getting called out multiple times by privacy-focused search engine DuckDuckGo for “spying on users,” Google has finally shared the details of how much personal data the company collects in Chrome and the Google app (via The Hacker News). 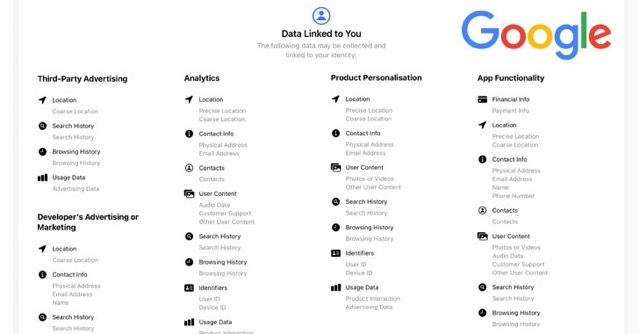 “No wonder they wanted to hide it. Spying on users has nothing to do with building a great web browser or search engine,” DuckDuckGo said in a tweet after Google released as part of Apple’s “privacy nutrition labels” policy for its App Store apps that went into effect on December 8, 2020.

Starting with iOS 14, first- and third-party apps will not only have to tell users what information they amass but also get their permission to do it.

With the new changes, it’s no longer possible for apps and third-party partners to accurately measure the effectiveness of their ads without asking explicit permissions from users to opt-in to being tracked using the identifier as they hop from one app to the other, a move that has riled up Facebook and others that sell mobile ads who heavily rely on this identifier to help target ads to users.

While companies can still track users through their own services on a first-party basis, they cannot share that information with third-parties without users’ permission.

You can get more details about the data shared by Google apps at the source page.