Microsoft Edge Browser for macOS is Now Available to Download

Earlier this week, Microsoft teased a macOS version of its Edge Chromium browser and today, it has made the very first beta of its highly anticipated Edge browser for macOS available to download. 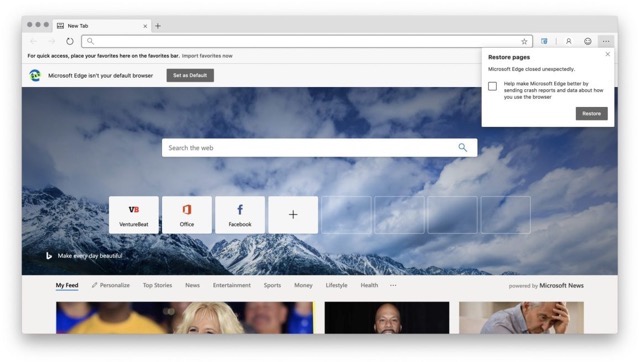 As noted by VentureBeat, Microsoft’s Edge browser for Mac is currently available in two separate pre-release forms i.e. daily and weekly, and as of now, even the more stable weekly version is not stable enough. Nonetheless, Mac users can still get a taste of what the new Chromium-based browser looks like on macOS:

“Even though Edge is arriving a little late, fans will be glad to see support for Edge extensions from the Microsoft Store and multiple user profiles, as well as Mac-specific Touch Bar support for tab switching, and slightly tweaked rounded tab corners. Unfortunately, macOS Mojave’s Dark Mode is not yet supported.”

For those interested in checking out Edge for macOS in preview form, it’s free to download. The following two versions are currently available to explore in early beta: