As reported by the folks over at Tesla North, an all-new version of the Hyundai Bluelink smart app will be released to the residents of Canada on August 19. 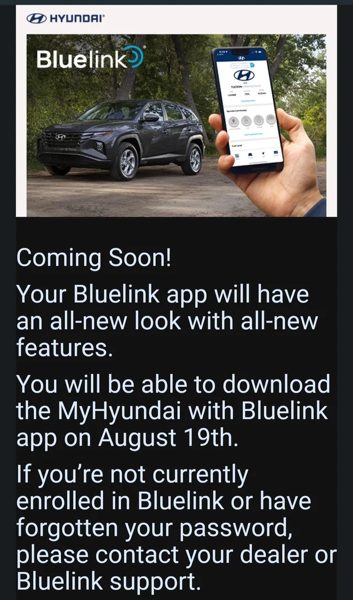 “Coming soon! Your Bluelink app will have an all-new look with all-new features. You will be able to download the MyHyundai with Bluelink app on August 19th,” Hyundai wrote in an email.

The email also notes that users not already enrolled in Bluelink should contact dealers. Additionally, any who are already enrolled but have forgotten their password should also call their Hyundai dealership.

While the company has not mentioned whether the smart app will be available for iPhone users, Android users, or both, it is quite likely that it will be released for download on both platforms.

Update August 22: A Hyundai spokesperson told iPhone in Canada the Bluelink app “is currently going through the Apple Store approval process and will be released concurrently with the Android version. We hope to launch the latest version of Bluelink in Canada this week.”