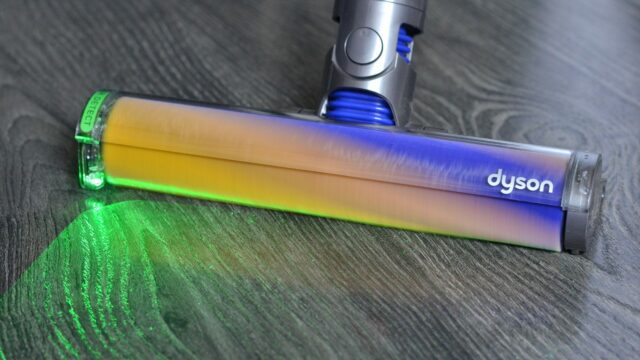 The Dyson V12 Detect Slim makes some significant quality of life improvements while not compromising on power. I’ve been using Dyson vacuums for the better part of three years. Across many of its previous cordless devices, I’ve been thoroughly impressed. Dyson typically delivers when it comes to power and suction. Plus, I’ve often found battery life is enough to cover my condo. That said, I’ve never been opposed to seeing Dyson try to one-up itself.

I’ve been using the Dyson V12 Detect Slim for a month or so. Each time I’ve finished with my cleaning rituals, I pack the compact cordless vacuum back in my closet and walk away with a mostly positive experience. It’s a very capable vacuum with sizeable battery life, efficient for many homes. Its suction is fairly close to that of the V10. Dyson’s V12 also offers a lightweight, easy-to-use experience, similar to the Omni-Glide. The device also offers many similar features to the premium V15 Detect Total for a comparatively lower price tag. Though, its noticeably small dustbin moderately holds it back.

If you’ve purchased a Dyson vacuum in the previous years, much of what you’ll find while unboxing won’t come as a surprise. The Dyson V12 Detect Slim offers the usual attachments. In the box, you’ll find the Dyson crevice tool to reach corners and in-between cushions. Additionally, Dyson includes the soft-bristle brush tool for furniture. 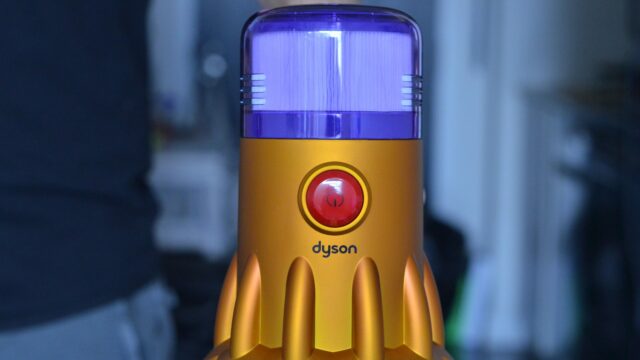 On top of that, the V12 includes the Motorbar cleaning head and a smaller Hair Screw Tool. Both are designed specifically to automatically clear wrapped hair from the brush bar. Specially designed vanes are integrated in order to avoid having to clean and remove hair. The box also includes the Laser Slim Fluffy head but more on that later.

Aside from a small assortment of cleaning heads, Dyson’s V12 Detect Slim doesn’t include anything crazy. It comes with a click-in battery and charging cable for the unit. While Dyson does offer replacements for the battery, there is only one included in the box. There is also the wall mount kit available if you chose to prop the unit upright in a closet or other area of the home.

From a design perspective, the V12 is incredibly lightweight. It looks similar to its premium V15 counterpart. This is especially true when looking at the handle unit. The handle offers an LCD display and a toggle on/off button. No longer are you forced to hold a button down throughout your cleaning sessions. The dustbin is now integrated vertically, making emptying it a breeze.

As mentioned, the V12 Detect Slim comes readily available with the Laser Slim Fluffy (yes this is the official name) cleaning head. This cleaning took makes up the ‘Detect’ portion of the V12’s name and is really the star of the show when it comes to Dyson’s latest innovation. Dyson has introduced its laster cleaning head prior, specifically with the V15. However, the V12 is lowering the barrier of entry via cost, enabling more users to reap the benefits of this technology. 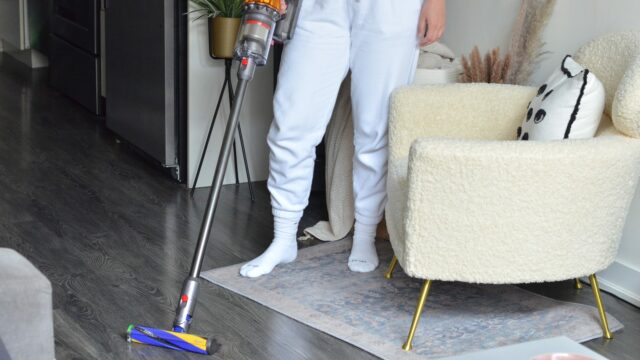 For those who have not seen Dyson’s Laser Slim Fluffy cleaning head in action, the tool shines a bright screen laser across the floor while vacuuming. The Laser Slim Fluffy illuminates its light at an angle that is capable of hitting even the smallest particles on the floor. As much as I’ve assumed I’ve done a thorough job cleaning, the light exposes areas I may have missed. It really opens your eyes to what you may normally miss. Having that advantage of actually seeing the particles of dust, hair, etc. makes for a deeper clean.

The Laser Slim Fluffy is equipped with carbon-fibre filaments, perfect for picking up the smallest bits of dirt from hardwood floors and crevices. Seeing it work its magic and seeing the difference beyond noticeable crumbs and dirt adds a new layer of reassurance. All in all, the V12’s inclusion and utilization of the Laser Slim Fluffy is the star of the show.

A dust and hair buster

As far as regular use goes, I’ve been fairly impressed with the V12 thus far. It has a definitive edge over previous models I’ve had the chance to use. As far as power and efficiency, I have witnessed the V12 outpace both the V10 Cyclone and Omni-Glide. What sets the V12 ahead of certain other models is the functionality to detect and react to the dirt it’s tackling. If the V12 notices there is more dirt in an area of the floor, it will automatically adjust its suction and power to compensate. Although this feature set may sound like the V12 kicks things off into overdrive, the change is very subdued but effective nonetheless. 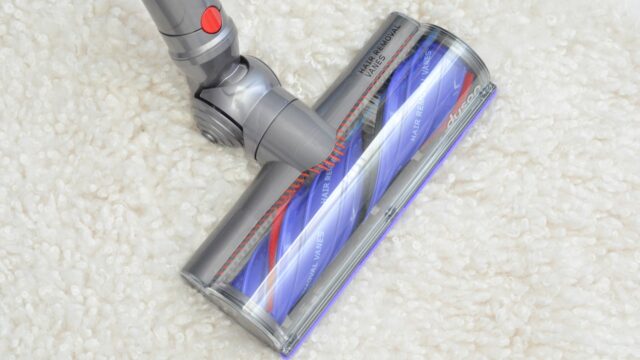 The addition of the Motorbar cleaning head is also a fantastic addition. No longer do I have to occasionally bust out a pair of scissors and remove bits of tangled hair from the cleaning head. The Motorbar is engineers to suck up hair, fur, and other such debris without it becoming a tangled mess. It’s all made effective thanks to the designed vanes. The Hair Screw Tool can also provide similar results so if you have a shaggy dog shedding all over your furniture, these cleaning heads can save you a lot of hassle over time.

Rounding out this overview of the V12 Detect Slim, I’d be remiss not to mention how efficient the battery is paired with its dustbin. It’s important to preface that I’ve been using the V12 Detect Slim in a mid-sized condo. With that in mind, at most I’ve been able to get a maximum of one hour out of the V12 prior to recharge. That, of course, is only when I utilize the device’s Eco mode. When doing a deeper clean on carpeting, Auto mode typically provides 40 minutes at most. If swapping to Boost mode, the V12 putters out at around 20 minutes.

Depending on your cleaning habits, the size of your home, and whether or not you’re willing to purchase a second swappable battery pack, the V12 may offer enough juice for your space. Keep in mind that Dyson claims to offer the same battery life that is featured on the V15. 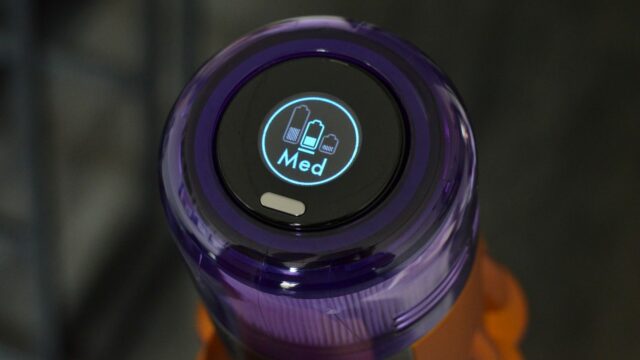 Thankfully, you won’t be left in the dark as far as how much battery life is left during your cleaning sessions. Similar to the V15, the V12 offers a small LCD display on the handle. This highlights a countdown clock, ticking away as the battery life depletes. Additionally, this display offers other useful information such as data regarding the particles being picked up. In incredible detail, the V12 can analyze particles sized between 500 and 10 microns. This means even allergens and dust particles can be read and shown on the display.

The other major aspect to address is the size of the dustbin. It appears as though Dyson opted to maintain the size of the bin used on the Omni-Glide. Now, this is smaller than other flagship models. The frequency of how often it’ll need to be emptied will ultimately be on a case-by-case basis. However, the reality is that it is a smaller container and for those with larger homes, that is going to impact the use.

Dyson has brought virtually all of its premium features and attachments and made a more cost-efficient product for its lineup. The innovations brought by both the Laser Slim Fluffy and Motorbar cleaning heads pack a one-two punch made perfect for any surface of a home. The data analyzer built into the V12’s LCD display offers some neat insight into the home and particles being sucked up. While battery life and dustbin constraints can impact purchasing choices when looking at your next vacuum, the V12 and its $849 price tag are certainly ones to consider.

The Dyson V12 Detect Slim is available in Dyson Demo Stores in Toronto, Vancouver, and Calgary and online on the company’s website.