Eve Systems has today announced the launch of its new Eve Cam indoor security camera that has been designed exclusively for Apple HomeKit Secure Video. Eve Cam will be available to purchase in April 2020 for US $149.95. 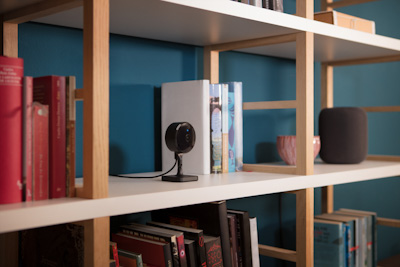 With HomeKit Secure Video, activity detected by Eve Cam is privately analyzed by your home hub, such as Apple TV or HomePod, using on-device intelligence to determine if people or pets are present.

When an important activity is detected, you and anyone you share your HomeKit Home with will receive a rich notification that lets you view the clip right from the iPhone Lock Screen. Recorded video is available to view for ten days from the Home app and is securely stored for free in supported iCloud accounts:

“Home security footage is highly personal, that’s why choosing the right indoor camera is so important”, says Jerome Gackel, CEO, Eve Systems. “Eve Cam is the first camera designed exclusively for Apple HomeKit Secure Video, enabling you to keep a close eye on your home while protecting the privacy of your personal space at any time.”

Alongside the Eve Cam, Eve Systems has also announced a HomeKit-enabled water leak detector called ‘Eve Water Guard’ as well as the second generation of its best-selling smart switch ‘Eve Energy’. The two smart devices will start shipping next month for US $79.95 and US $39.95 respectively.