Facebook has today released its 2020 Sustainability Report, highlighting the progress it has made on its sustainability goals. “We’re proud that we met our goals of reaching net-zero emissions and 100% renewable energy for our global operations,” notes the company. 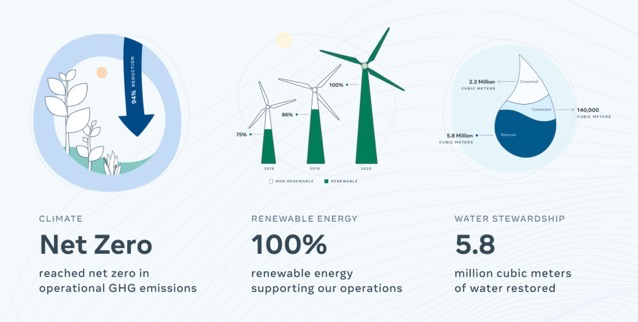 According to the report, Facebook has reduced its greenhouse gas emissions by 94% from 2017 levels, exceeding the company’s goal of a 75% reduction. It has restored nearly 5.8 million cubic meters of water in high water stress regions, while increasing its operating portfolio of wind and solar to over 2.8 GW.

The company has also invested in high-quality carbon removal projects that removed 145,000 metric tons of carbon from the atmosphere, including reforestation projects in East Africa and the Mississippi River Valley.

During last year’s global pandemic and economic recession, the health and resilience of workers in our global supply chain was a leading priority. To that end, Facebook worked with our priority suppliers to address labor, human rights, and health and safety focus areas across our supply chain.

We are proud of what we have achieved, but we’re not done yet. In 2020, we set a new goal: reaching net zero emission for our value chain in 2030.

You can read Facebook’s 2020 Sustainability Report in full here.

SpaceX has delayed the implementation of a new Fair Use policy on Starlink connections in Canada and the U.S. to February 2023, according to an update on the company's website (via Tesla North). The policy, which will institute data caps on Priority Access usage for all Starlink Residential customers in Canada and the U.S. and...
Nehal Malik
1 hour ago