Facebook Ads Generate 1,790% More Revenue On iPhone Than On Android

Mobile advertisements on iPhone generate 1,790% more return on investment than they do on Android, according to a study of over 200 billion ads on Facebook. Worst of all, it costs way more to advertise on Android than it actually returns, VentureBeat reports. 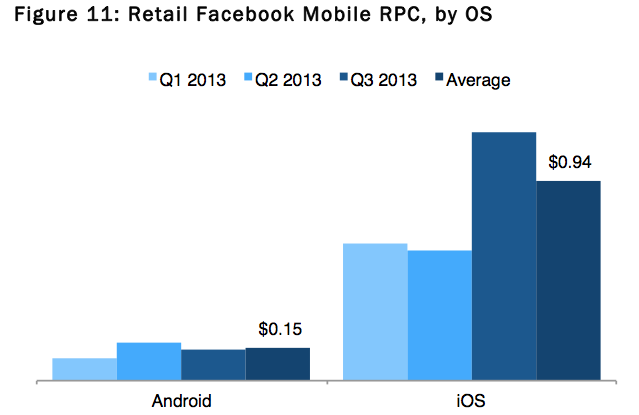 The study, which was carried out by Nanigans, one of the biggest buyers of Facebook ads, focuses on retailers, saying that in the past year on Facebook’s desktop ads, clickthroughs are up 375% and overall return on investment is 152%. But when it comes to mobile advertising, the report says that retailers are realizing significantly greater return from audiences on iOS than audiences on Android. “For the first three quarters of 2013, RPC [revenue per click] on iOS averaged 6.1 times higher than Android and ROI [return on investment] on iOS averaged 17.9 times higher than Android”, claims the study.

“Retailers have a large opportunity on mobile, the company says, but clearly the opportunity is much, much more lucrative on iPhone than it is on Android. Frankly, the numbers are shocking.

It’s not just that Android monetizes worse than iOS — it actually offers negative return on investment. In other words, while advertising on iOS brings retailer 162 percent more cash than they spend on the ads, advertising on Android returns 10 percent less than the cost of the ads.”

The report concludes by saying that the iPhone owners simply tend to both make more money and spend more money than Android owners. Do you agree?