Facebook has today announced the launch of a new ‘Marketplace’ within its main app, in an effort to offer a convenient destination to discover, buy and sell items with people in your local community. The company said that buying and selling in Facebook Groups has grown substantially, with over 450 million people visiting such groups every month. “Marketplace makes it easy to find new things you’ll love, and find a new home for the things you’re ready to part with”.

The new Marketplace is accessible from within the main Facebook app. Simply tap on the shop icon at the bottom of the Facebook app and start exploring. Marketplace opens with photos of items that people near you have listed for sale.

To find something specific, search at the top and filter your results by location, category or price. You can also browse what’s available in a variety of categories. Once decided that you want an item, you can send the seller a direct message to tell them you’re interested and make an offer. Selling an item in Marketplace is just as easy. 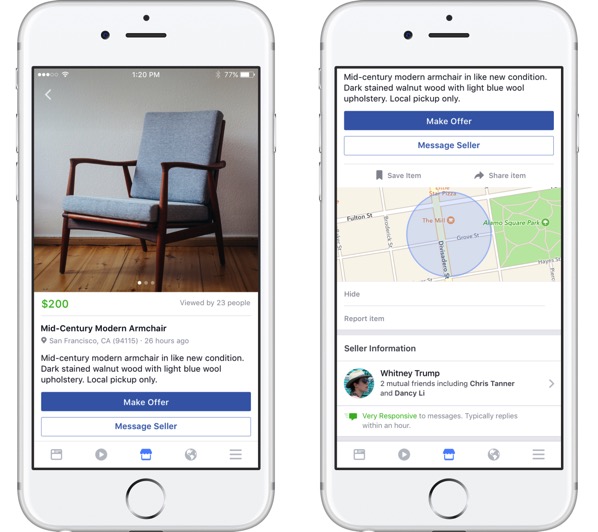 As pointed out by Re/Code however, the Marketplace tab has effectively replaced the Messenger tab, which has been in that spot ever since Facebook released its dedicated Messenger app. “That’s prime real estate for Marketplace, and a clear indication of how important the new effort is for Facebook”. Here’s how Facebook has explained this move:

“We’ve been rolling out the video tab slowly so that we can test and learn from people, and to gather feedback to ensure that we’re creating the best experience for people who visit the tab,” a company spokesperson said. “We’re iterating on placement for the tab, though it will ultimately be on the bottom bar of News Feed on mobile.”

Facebook Marketplace is rolling out on iOS today in the U.S., U.K., Australia and New Zealand.

As part of its continuing production diversification initiative, Apple has ordered for a portion of its AirPods and Beats headphones to be manufactured in India. Apple has begun to double down on manufacturing its devices in India. As a way to lower its dependence on China, Apple has made an order to its suppliers to...
Steve Vegvari
14 mins ago