Earlier this month, Facebook introduced a new Community Help feature that lets people ask for help or provide it during the COVID-19 pandemic. Today, the company has revealed that it has expanded its efforts to connect people to accurate information and keep harmful misinformation about COVID-19 from spreading. 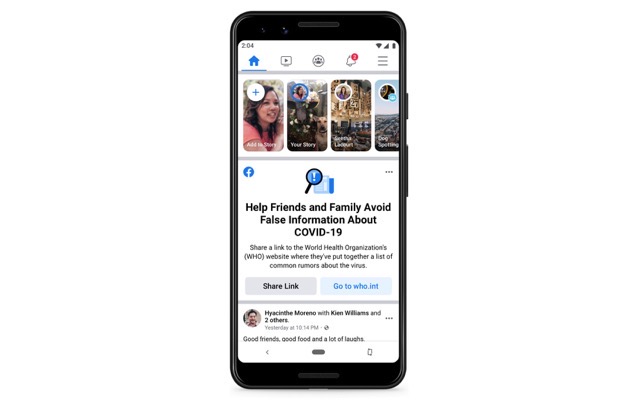 Facebook says it is currently working with over 60 fact-checking organizations that review and rate content in more than 50 languages around the world. Since the beginning of March, the social networking giant has added eight new partners and has expanded its coverage to over 12 new countries.

Over the past few weeks, Facebook has added MyGoPen in Taiwan, the AFP and DPA in the Netherlands, and Reuters in the UK, among others.

Moreover, Facebook says it will start showing messages in News Feed to people who have liked, reacted or commented on misinformation about COVID-19 that has now been removed.

“To make it easier for people to find accurate information about COVID-19, we recently added a new section to our COVID-19 Information Center called Get the Facts. It includes fact-checked articles from our partners that debunk misinformation about the coronavirus. The fact-check articles are selected by our News curation team and updated every week.”

Facebook’s new Get the Facts section is currently available in the U.S. only.