Facebook has today started rolling out a new notification screen worldwide that lets people know when news articles they are about to share are more than 90 days old. The feature comes following concerns expressed by news publishers about older stories being shared on social media as current news. 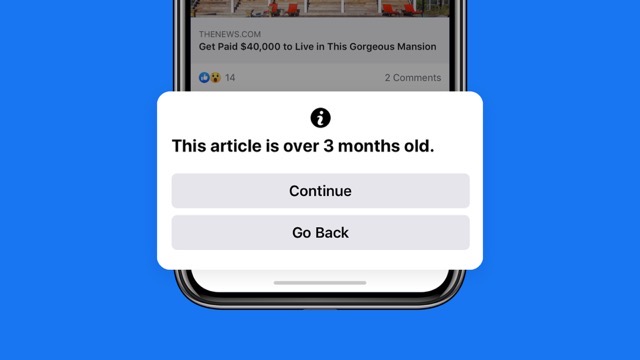 Some news publishers have already taken steps to address this issue on their own websites by prominently labeling older articles to prevent outdated news from being used in misleading ways.

To ensure people have the context they need to make informed decisions about what to share on Facebook, the notification screen will appear when people click the share button on old articles but will allow people to continue sharing if they decide an article is still relevant.

“Over the next few months, we will also test other uses of notification screens. For posts with links mentioning COVID-19, we are exploring using a similar notification screen that provides information about the source of the link and directs people to the COVID-19 Information Center for authoritative health information.”

Facebook says it will continue to work towards its goal to make it easier for people to identify content that’s timely, reliable, and most valuable to them.

It's confirmed that Rihanna will headline next year's Super Bowl LVLL Halftime show. 2023's mega-sporting event will be the first to see Apple Music take over as the official sponsor of the halftime show as Pepsi exits its deal. The news was confirmed via social media where Apple Music, Rihanna, and the NFL all confirmed...
Steve Vegvari
23 mins ago