According to a CNET report, Facebook is giving a small percentage of users the chance to test a cleaner, faster new interface on desktops. The source notes that select Facebook users are shown a pop-up asking them if they want to participate in testing “The New Facebook.” 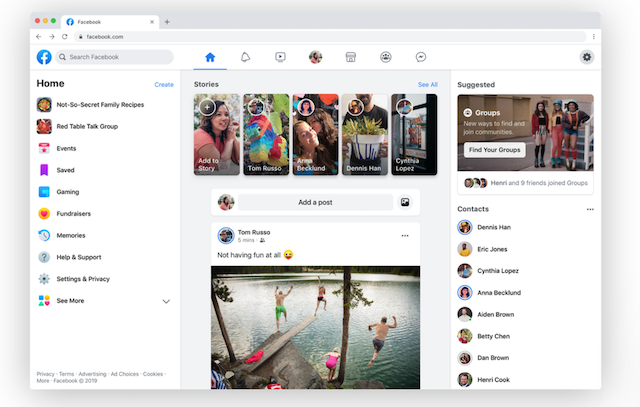 Users who accept the invitation to try out the big Facebook redesign are offered to set the website to use white backgrounds and bright colours, or a dark-mode background.

The social network is offering users the option to switch back to the older, standard look they’re used to. People can also give the company feedback, telling it if some feature is broken or giving their general thoughts:

Facebook’s new look comes at a time when the social networking giant is trying to move past the many privacy and corporate malfeasance controversies it’s faced. But with the 2020 US election heating up, there are concerns the company may not be appropriately ready for additional election meddling, disinformation, and propaganda that might spread on its service.

Facebook initially said it will begin offering the new design last year but still hasn’t broadly made it available.

WhatsApp is finally rolling out the ability for users to leave group chats silently without notifying all members of the group that they are no longer part of the conversation. When you leave a WhatsApp group silently, only the group admin will be notified that you have left the chat. Meet leave groups silently 👋...
Usman Qureshi
12 hours ago