Faraday Café Designs a Cage to Block all Wireless Connectivity

According to a report by The Globe And Mail, a cage in the centre of the Faraday Cafe in Chinatown, Vancouver, promises to provide an escape from wireless connectivity by blocking electrical signals that link cellphones, smart phones and laptops to the rest of the world. The cage is said to be made of wood with an aluminum metal mesh designed to keep out signals. 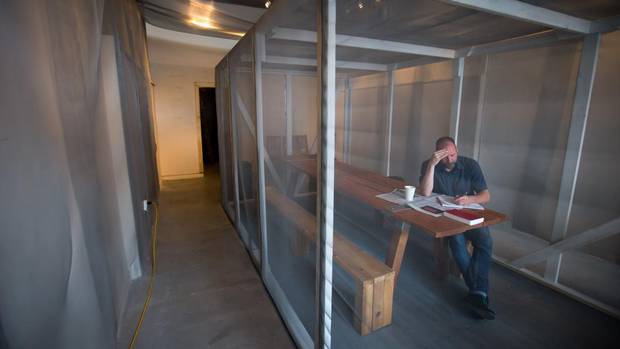 The café opened its doors yesterday, as part of an effort to spur people to “unplug from the grid and find a kind of detached tranquillity” in a space without the distractions of wireless technology. The source notes that the cage echoes the function of an actual Faraday cage, which is used in labs to shield people or things from static and non-static electric fields. Inside the café’s cage is a picnic table that can seat about 16 people.

On Thursday, artist and writer Steve Frost was giving it a try. He sat happily in the cage reading The Globe and Mail – his pursuit of tranquillity fractured only by TV camera crews and a print reporter, who peppered him with questions about the experience.

He said he likes the idea of disconnecting and unplugging – something his artists collective has tried in 24-hour slices to bolster their creativity. But he said the cage is better because there is no choice. “It’s sad, but also reality that it has come to this,” Mr. Frost, 51, said of retreating into the cage to disconnect.

The café will only be operating until July 16 in the pop-up space provided by the storefront where it’s located. Until then, proprietor Julien Thomas is hoping to take cage occupants back to a time before they were connected. “There was life before the Internet,” he said.

Mr. Frost also said he knows he will eventually have to, himself, find the tranquillity the café now offers. One option, he said, would be to occasionally recreate the cage elsewhere.

Apple's long-awaited AR/VR headset may not start shipping until the second half of 2023 due to a delay caused by some "software-related issues," according to TF International Securities analyst Ming-Chi Kuo. Kuo previously had the headset pegged for a second-quarter release. He said in a tweet that his sources indicate components for the mixed-reality headset...
Nehal Malik
14 mins ago