Feedly has announced this morning its Normandy initiative, known as its cloud solution first announced back in mid-March, has gone live for all users. This means their service can now replace Google Reader prior to its shut down on July 1st.

Feedly cloud is now live, providing a fast and scalable infrastructure to seamlessly replace Google Reader. Feedly cloud also comes with a completely stand-alone Web version of feedly, that works with all major browsers. Finally, we are please to announce the first nine applications built on feedly cloud, that allow you to expand your feedly experience.

Feedly notes its cloud service is fast, scalable and based on open infrastructure, allowing the company to process over 25 million feeds (they say it has the horsepower to fetch 100 million) and blast through billions of articles publish daily. An upcoming API to Feedly cloud which will bring on more apps to support the service; over 200 developers have contacted the company since they first announced their plans to support an API. 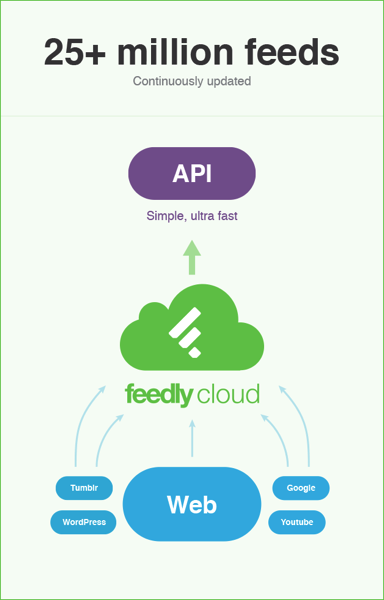 Also, today marks a new standalone web interface which does not require any browser plugins over at http://cloud.feedly.com, which is excellent news. Has Feedly just won the war to take on Google Reader refugees? With cloud access to RSS feeds via the web, iOS and plenty of upcoming apps, who else can take them on?