Looks like the wars for NFC mobile payments have once again started to heat up. Interac today has announced it has completed the first NFC debit transaction at McDonald’s, with funds being withdrawn from a RBC Royal Bank account. 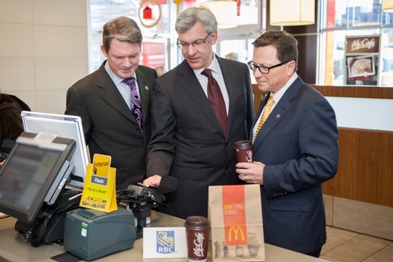 Dubbed Interac Flash, today’s NFC transaction was made on a BlackBerry (sounds similar to Rogers and CIBC’s NFC demo at Tim Horton’s a while back) as it ‘tapped’ a Moneris terminal. RBC says Interac Flash debit transactions will be free for personal banking accounts.

“This achievement in mobile debit innovation helps solidify our role in the mobile payments space in Canada,” said Mark O’Connell, President and CEO, Interac Association and Acxsys Corporation. “Soon, Canadians will be able to use their mobile phones to pay with Interac Flash quickly, conveniently and securely when making everyday purchases – bringing added value not only to consumers, but also to the merchant community and our partner financial institutions.”

Scotiabank was also present and announced it would also be participating in providing support for Interac Flash NFC payments. Estimates note the market for cash transactions below $20 is worth more than $90 billion per year, so early adopters are looking to jump on this with mobile payments. Unfortunately at this time, there is no NFC support on the iPhone.