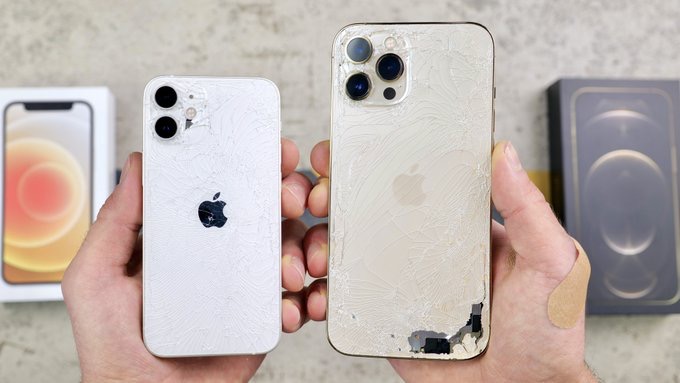 With today’s launch of these two new iPhones, the channel was finally able to put these devices through its drop test onto the concrete surface of a garage floor. While the back glass of these phones shattered as expected, the front glass was extremely durable.

“I cannot believe how much damage the iPhone 12 Pro Max has sustained, still a trooper,” says the channel after dropping both devices from various heights, including from the top of a ladder. The Ceramic Shield front glass again prevails as both displays on each iPhone did not break whatsoever. Apple says Ceramic Shield offers four times the durability compared to last year’s iPhones.

As for a bend test on both of these phones, EverythingApplePro was unable to completely bend either of these devices. Essentially, the iPhone 12 Pro Max and iPhone 12 mini aren’t going to bend easily.

“Once again, blown away by the performance of the durability of the Ceramic Shield” on these new iPhones, says EverythingApplePro.

Of course, don’t try this at home but from what we’ve seen so far Ceramic Shield still protects better against drops from other iPhones. In the meantime, you’ll want to buy an iPhone 12 case or glass screen protector for your new phones. Check out some affordable glass screen protectors and cases from Spigen below:

Apple has just teased a handful of new titles which will be added to Apple Arcade’s ever-growing catalog of games during the month of December. In a tweet posted earlier today, Apple shared the following three new games are coming to its gaming subscription service this month: Dead Cells+ by MotionTwin JellyCar Worlds by Walaber...
Usman Qureshi
53 mins ago