A newly released health app called ‘Achu’ developed by a Toronto-based startup Datapult, uses Fitbit data and alerts you when your body is showing signs of a reoccurring illness, such as a cold, before it happens (via HitConsultant). “The more interactive you are with achu, the more accurate it will be in helping you to stay healthy,” says Michael Morra, CTO of Datapult. 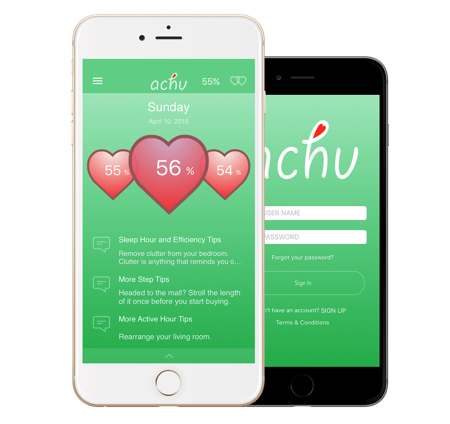 The Achu app basically tracks patterns leading up to sickness using a proprietary algorithm, and alerts the user about the fact that you are on the same track to get sick, as you have been in the past. “When you feel tired, achy, feverish, stuffy – whatever the symptom, you calibrate the achu app, and it will then start to match data from your past”, explained Morra. The app’s algorithm is based on tracking the patterns in each of the metrics recorded by the Fitbit, including heart rate and sleep efficiency, combined with users input into achu’s sickness calibration system.

“We expect a user to experience parallel sleep, heart rate, step and active patterns leading up to a sickness. Therefore, if their most recent data mirrors their data from when they experienced the same symptoms, our algorithm would calculate a high probability of a repeat illness for this individual calibration,” says Morra.

In order for achu to know what health patterns constitute the individual user being sick, they must first calibrate the app by entering their symptoms when they are, in fact, sick. They then have the option to track various symptoms such as: headache, cough, runny nose, stuffed nose, fatigue, fever, and aches and pains.

Currently, the app does not support Apple Watch, although the developers are working to bring out support for other health wearables as well. But if you own a Fitbit device, this might be a useful app to run on your device. The companion app for iOS can be downloaded using the following link: