Flipp is by far the best flyer app for Canadians made by Toronto-based Wishabi. The app was recently updated to bring screen support for iPhone 6 models, plus also support Continuity in iOS 8.

Also new are smart reminders for your clippings, to inform you when they expire and also location-based alerts for active clippings saved, to go with performance enhancements and bug fixes. The new options for notifications are under the ‘Clippings’ tab and will require location and push notifications enabled for the app. 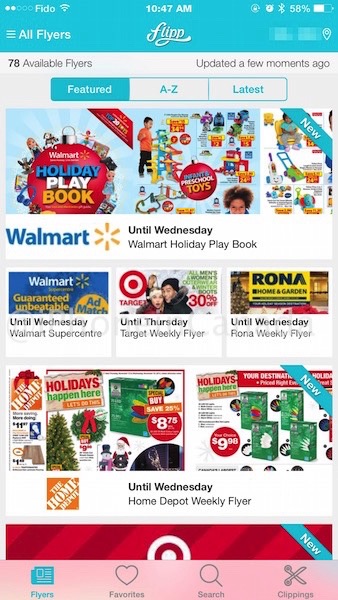 Flip launched last fall and iTunes reviews remain very positive for this innovative flyer app. While there are still some missing flyers for smaller local grocery chains, overall the app is easy to use and makes flyer clipping really easy on your iPhone or iPad. Wishabi told us via email monthly active Flipp users are now just under 1 million, which is not too shabby.

Update: Flipp has informed us via email the nearby notifications feature is currently in beta.