The U.S. Patent and Trademark Office (USPTO) has granted Apple a new iPhone design patent titled “Flexible display devices”, which details an iPhone with a foldable metal-backed OLED display. According to AppleInsider, Apple’s proposed design folds in two when not in use for easy storage, similar to the Motorola clamshell cellphones from the 1990s. 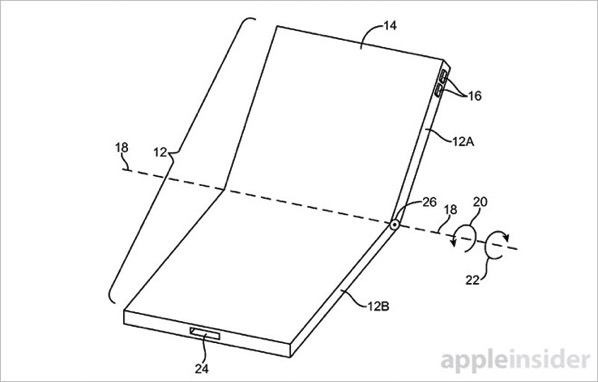 Apple notes that to achieve a foldable design, a number of flexible components, including an OLED display, and a metal support structure is required, for which Apple proposes nitinol, a nickel and titanium alloy known for its elasticity and unique shape memory abilities. In one embodiment, the foldable phone incorporates a chassis or device housing split into upper and lower sections, each containing processors, sensors and other typical smartphone circuitry.

Installed over the two housing structures is the display. Interestingly, Apple’s document notes the flexible screen can include extra material to accommodate two or more folding configurations.