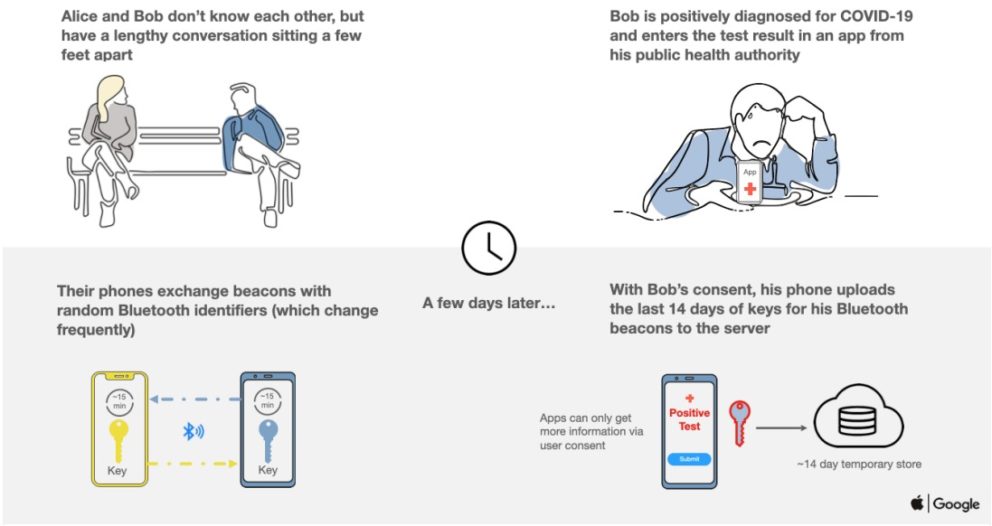 Apple and Google are set to release its exposure notification API for health authorities to implement into their COVID-19 contact tracing apps.

The solution from both companies uses Bluetooth technology instead of GPS to help track the spread of COVID-19. Here’s how the opt-in solution will work according to Apple and Google:

Once enabled, users’ devices will regularly send out a beacon via Bluetooth that includes a random Bluetooth identifier — basically, a string of random numbers that aren’t tied to a user’s identity and change every 10-20 minutes for additional protection. Other phones will be listening for these beacons and broadcasting theirs as well. When each phone receives another beacon, it will record and securely store that beacon on the device.

At least once per day, the system will download a list of the keys for the beacons that have been verified as belonging to people confirmed as positive for COVID-19. Each device will check the list of beacons it has recorded against the list downloaded from the server. If there is a match between the beacons stored on the device and the positive diagnosis list, the user may be notified and advised on steps to take next. 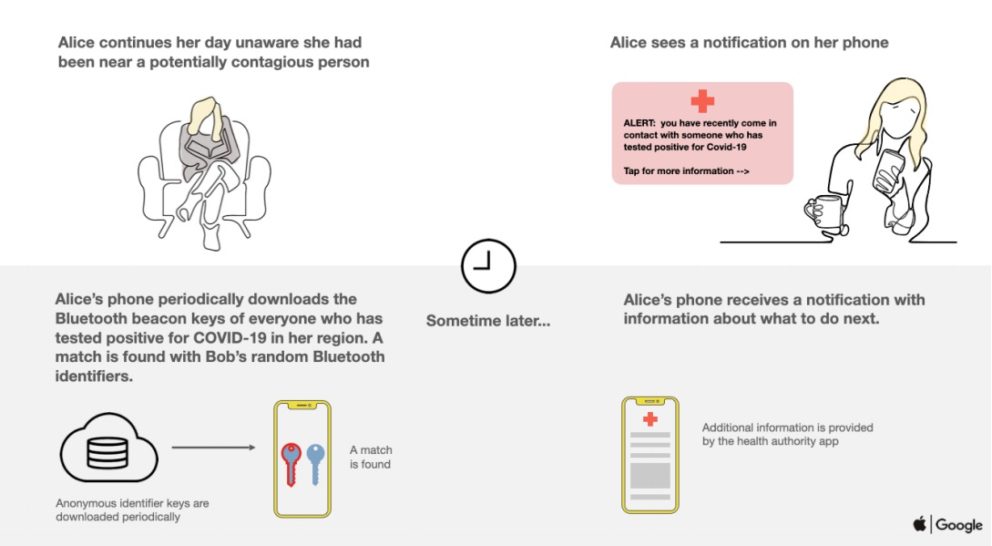 According to Global News, the former privacy commissioner of Ontario from 1997 to 2014, Ann Cavoukian, supports Apple’s solution.

“Apple has walked me through on two occasions all of what they’ve done in terms of the tech and the privacy, preserving features and no geolocation data and everything. And so I can give my vote of confidence to it,” said Cavoukian.

The solution from Apple and Google will be seamless for iOS and Android users, as both companies will tie the Bluetooth contact tracing solution into the mobile operating system and be allowed to work in the background. Regular iOS apps don’t allow Bluetooth in the background, while Android has similar limitations, only allowing for Bluetooth to be used a few minutes after an app has been closed.

These limitations are seen in a recent solution from the province of Alberta’s COVID-19 contact tracing app, which requires iOS users to keep the app open and screen on for it to be effective.

Prime Minister Justin Trudeau said in March there were no plans to use cellphone tracking to fight COVID-19, but said “all options” were on the table. Privacy concerns are a major issue when it comes to a contact tracing solution in Canada.

Governments around the world have mixed opinions on which COVID-19 contact tracing method to use, either going at it alone or adopting Apple and Google’s solution.