Epic Games emailed Fortnite users tonight to let them know the latest Chapter 2 – Season 4 update (v14.00) did not release on iOS and macOS on August 27.

“Apple is blocking Fortnite updates and new installs on the App Store, and has said they will terminate our ability to develop Fortnite for Apple devices,” explains Epic Games.

“If you already downloaded Fortnite via the App Store, you should be able to continue playing Chapter 2 – Season 3’s v13.40 update. Note: Since the Season 3 Battle Pass ended on August 27, further progression is not possible on any platform,” says the company. 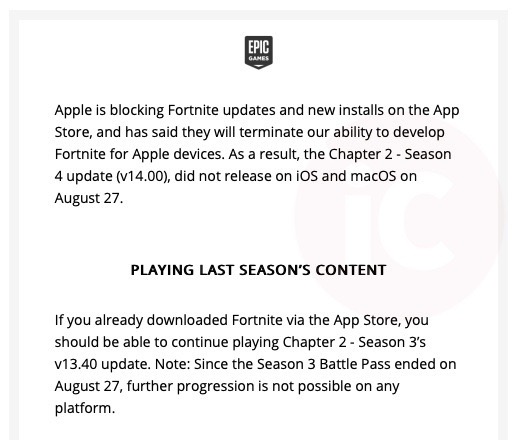 Those that have previously downloaded Fortnite will be able to re-download it in the App Store, by going to their Purchased tab and tapping the Cloud/Download button next to the Fortnite app.

While users will be able to play v13.40 of Fortnite, new content in Chapter 2 – Season 4 Battle Pass will not be available, especially new cosmetic items added after v13.40. These will not be available in your iOS locker if they were purchased on another gaming platform.

Gifts that debut in v14.00 won’t be able to be received, while new challenges and Quick Challenges on iOS won’t be possible.

As for why this is happening? Epic Games explains:

Apple limits competition so they can collect 30% of consumer payments made in apps like Fortnite, raising the prices you pay. Epic lowered prices through a direct payment option, but Apple is blocking Fortnite in order to prevent Epic from passing on the savings from direct payments to players. Epic has taken legal action to end Apple’s anti-competitive restrictions on mobile device marketplaces. Papers are available for our August 13, August 17, and August 23 filings. In retaliation for this action, Apple blocked your access to Fortnite updates and new installs on all iOS devices.

Epic Games tried to implement their own payment method to bypass the App Store’s 30% cut. This breaks Apple’s developer agreement and subsequently, Fortnite was removed from the App Store.

A judge ruled this week Apple cannot block Unreal Engine from developers in the App Store, but the removal of Fortnite is okay, as “the current predicament appears of its own making,” referring to Epic Games, said Judge Yvonne Gonzalez Rogers.