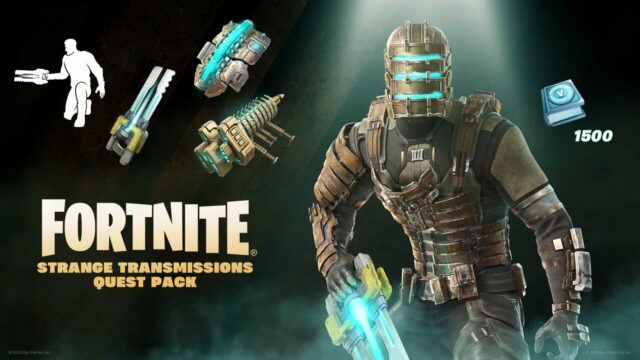 Announced by the company, Fortnite players can gain access to the Issac Clarke skin by purchasing the Strange Transmissions Quest Pack within the game’s Item Shop. This Quest Pack is available in Canada for $15.99. By purchasing it, players can collect the Issac Clarke Outfit as well as Strange Transmissions Quests. Completing these quests not only earns players 1,500 V-bucks but the following cosmetics:

Grab the Strange Transmissions Quest Pack now which includes:
-Isaac Clarke Outfit 🚀
-Two Back Blings and a Pickaxe ⛏️
-Quests to earn up to 1,500 V-Bucks 🎉

Fortnite‘s Gaming Legends Series is expanding with the addition of Issac Clarke. The roster of characters is already pretty astounding with the likes of PlayStation’s Kratos, Xbox icon Master Chief, as well as Lara Croft, Ryu, and more.

The timing of this crossover couldn’t be better as the highly-anticipated Dead Space remake launches this week on PlayStation 5, Xbox Series X/S, and PC. Developed by Montreal-based Motive Studios, a built-from-the-ground-up remake of 2008’s beloved title is on its way and hopes to wow fans. Stepping back into the shoes of Issac Clarke on the Ishimura spaceship and fighting Necromorphs, Dead Space is seeing a long-awaited revival.

The Strange Transmission Quest Pack is available in Fortnite across all platforms now.