Do you use Foursquare to check-in to places and also see what your friends are up to as well? If you do, one app to do both actions will soon end as Foursquare has big plans to reinvent itself.

Today, the company has announced it is now splitting up its app into two, with the coming launch of another app called Swarm, which will concentrate solely on letting you find out where and what your friends are up to.

Here’s what Foursquare has to say about Swarm and why they created it:

We built Swarm because you’ve told us how often you still have to text your friends: “where are you?” and “what you up to later?” We wanted to build a quick way for you to know these two things for all of your friends. With Swarm, you can easily see which of your friends are out nearby, figure out who is up for grabbing a drink later, and share what you’re up to (faster and more easily than you can in Foursquare today). Swarm will be available on iOS and Android in the coming weeks…

The company also announced a brand new Foursquare app, which will “ditch the check-in” and rather concentrate on exploration and discovery, to compete with Yelp for local search, reports The Verge, which got an exclusive look at Swarm and the future of Foursquare. 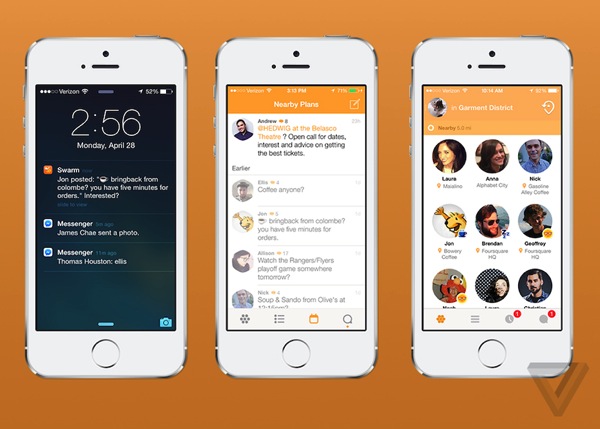 Foursquare says their goal was to “never build an awesome check-in button” and the new focus of the company with Swarm is to go beyond that.

With Swarm, you can check into places but it will also passively reveal your general location even if the app is closed and update your status if you enter a new area. This ambient location sharing is what will make Swarm different from Facebook, but if you’re downloading this app you’re granting permission to participate in doing so.

Swarm isn’t available yet but you can sign up at SwarmApp.com to get notified when it’s ready for download.

What are your thoughts on Foursquare splitting up its app into two?