With HP introducing the Pre 3 and Veer running the latest version of WebOS, it gave smartphone customers even more choice. The latest news comes from Nokia and Microsoft, as both companies have announced a partnership.

In an open letter written by both CEOs, Steve Ballmer and Stephen Elop describe the focus of this new relationship:

â€¢ Nokia will adopt Windows Phone as its primary smartphone strategy, innovating on top of the platform in areas such as imaging, where Nokia is a market leader.

â€¢ Nokia will help drive and define the future of Windows Phone. Nokia will contribute its expertise on hardware design, language support, and help bring Windows Phone to a larger range of price points, market segments and geographies.

â€¢ Nokia and Microsoft will closely collaborate on development, joint marketing initiatives and a shared development roadmap to align on the future evolution of mobile products.

â€¢ Nokia Maps will be a core part of Microsoftâ€™s mapping services. For example, Maps would be integrated with Microsoftâ€™s Bing search engine and adCenter advertising platform to form a unique local search and advertising experience.

â€¢ Nokiaâ€™s extensive operator billing agreements will make it easier for consumers to purchase Nokia Windows Phone services in countries where credit-card use is low.

â€¢ Microsoft will continue to invest in the development of Windows Phone and cloud services so customers can do more with their phone, across their work and personal lives.

â€¢ Nokiaâ€™s content and application store will be integrated with Microsoft Marketplace for a more compelling consumer experience.

[the best line]…There are other mobile ecosystems. We will disrupt them.

Oh. My. Gawd. I used to love Nokia phones up until their early Symbian OS days (I loved the 3650!), until iOS came along. Nokia hasn’t innovated in the smartphone arena, as their offerings have been just slightly more embarrassing than products from RIM.

It brings no surprise that Nokia would team up with Microsoft, as Stephen Elop was the former head of Microsoft’s Business Division (he’s also a Canadian from Ontario).

Check out their video (Ballmer is awesome):

How will this partnership play out? We don’t know. I predict it could be a disaster as both companies haven’t shown any real vision with their smartphones. The saying “the blind leading the blind” comes to mind. At the time of publishing, Nokia’s stock price has dropped more than 10% in Helsinki–that’s not good news. 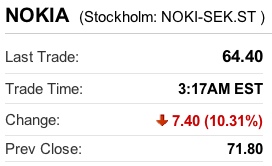 In a press release geared towards investors, here are Nokia’s plans for the next two years:

Transition years, huh? This strategic partnership will give customers more choice, and will make one more ‘real’ threat that Apple will have to contend with, keeping Cupertino on their toes.

What do you think? How will Nokia + Microsoft get along? Will this show signs of brilliance or disaster?