According to London’s AM980, select outlets will be converted to Best Buy locations, but the rest will be closing permanently, including the one in North London, as seen by the sign below posted on the store’s doors this morning: 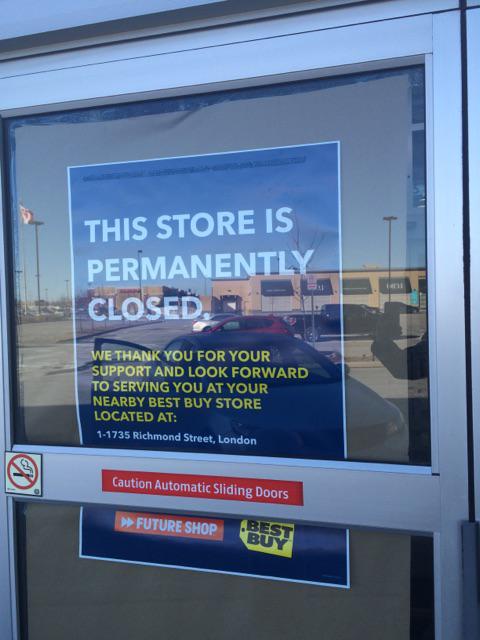 According to the Future Shop iPhone app, it has apparently confirmed closures:

Wow. So this Future Shop story appears to be true. Closing all its stores and being replaced by Best Buy. pic.twitter.com/PVSsa4PECO

We’ve reached out to Future Shop for comment to see which stores will turn to Best Buy locations and will update this post. No statement has been released yet by the company.

Future Shop has over 10,000 employees across its 140 stores coast-to-coast. The company is a division of Burnaby-based Best Buy Canada Ltd., which is owned by Best Buy Co., Inc. in the USA, which purchased the chain back in 2001 for $580 million.

These closures mean Apple customers have one less authorized retailer to purchase products from, especially those without Apple retail locations in their area or a Best Buy. The company was also a major player in wireless, constantly signing up new customers and performing hardware upgrades for Rogers, TELUS and Bell.

For those on the westcoast, this is like the death of A&B Sound all over again, which was put into the grave–by Future Shop.

You have to feel for these employees and how shocked they must be showing up for work, only to find out their jobs have been eliminated. Let us know if you see anything at your local Future Shop location. 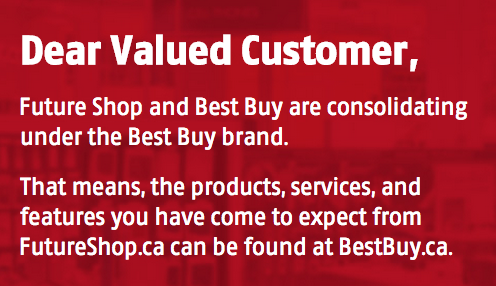 The company has also listed a FAQ, which states select stores closed today will reopen on April 4, 2015 as Best Buy locations. Those in close proximity of Best Buy stores are done. The site also notes the Future Shop iOS app will be shut down in favour of the Best Buy app.

A spokesperson told the Vancouver Sun 500 full-time and 1000 part-time jobs will be lost. Meanwhile, 66 locations will permanently close, while the remaining 65 will turn into Best Buy locations.

BREAKING: 66 Future Shop stores across Canada have been shut down. The other 65 will become Best Buys.

Update 2: According to the Best Buy press release:

Currently, 80 per cent of our customers are within a 15 minute drive to a store and this won’t change,” said Ron Wilson, President and COO of Best Buy Canada. “We will continue to have a strong store presence in all major markets in Canada.”

As a result of this consolidation, approximately 500 full-time and 1,000 part-time positions will be eliminated. The affected employees will receive severance, employee assistance and outplacement support.

“Any decisions that impact our people are never taken lightly; our first priority is to support them through this change,” Wilson said. “I want to express my appreciation to the employees who are leaving, for their contributions to Best Buy Canada.”

The company says it plans to spend $200 million to do the following:

Update 3: The Future Shop iPhone app now displays this message, for you to download the Best Buy app instead: 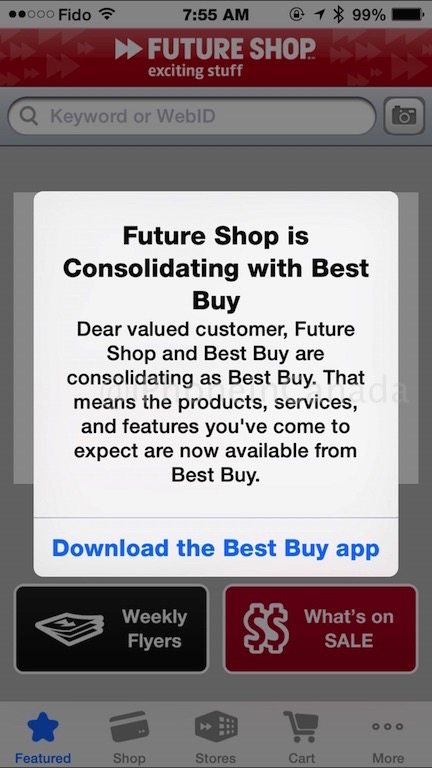