Google Canada has today announced some new features coming soon to Pixel smartphones, including the ability to easily access and share audio recordings at recorder.google.com, a new way to use the Pixel Camera app underwater, and new wallpapers. 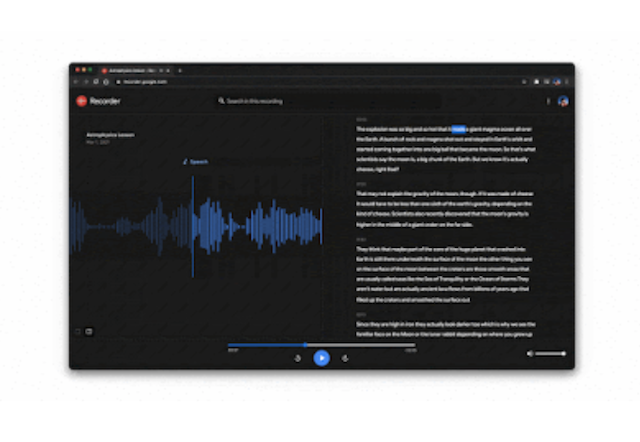 The update lets users share links to their Recorder audio files, so anyone can listen, even if they don’t have a Pixel. At recorder.google.com, users can hear recordings, see transcripts and even search through files. Users can also back up recordings to their Google Account.

Google says divers will now be able to use their Pixel camera with the Kraken Sports’ Universal Smart Phone Housing to capture marine life and landscapes. They can use all camera features, including Night Sight, Portrait Mode, Motion Photos, and video directly through Pixel’s Camera app.

Part of Pixel’s latest drop also includes new wallpapers that celebrate different cultural moments throughout the year with artwork from artists around the world. And for International Women’s Day on March 8, Pixel will add new wallpapers illustrated by Spanish duo Cachetejack, which focus on the strength and transformation of women.

Your Pixel will receive these feature drops during the applicable Android update and support periods for the phone.

Designer Jonas Daehnert (@PhoneDesigner) has just shared what an 'iPhone Ultra Edition' might look like based on the design of the Apple Watch Ultra. Yesterday, Bloomberg‘s Mark Gurman speculated that Apple could launch an even pricier "iPhone Ultra", positioned above the “Pro Max,” next year. In the past, the analyst had said that Apple is likely...
Usman Qureshi
38 mins ago

Apple on Monday released tvOS 16.3.1 and HomePod software version 16.3.1 for download. As for release notes? For HomePod 16.3.1, Apple says it includes general performance and stability improvements without going into specifics. The software update size is 467.8 for the original HomePod. In order to update your HomePod software, you need to launch the […]
Gary Ng
55 mins ago