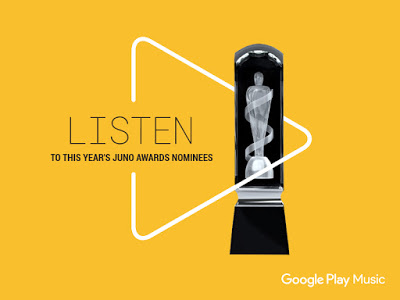 The official Google Canada Blog has today announced that Google Play Music is partnering with the 2017 JUNO Awards, honouring Canada’s rich and diverse musical history and contributions to the global music stage. Google has also created a 2017 JUNO Awards Nominees playlist, that features this year’s JUNO-nominated songs, albums and artists.

From maple syrup music legends like The Tragically Hip and Céline Dion to hook-heavy fan favourites Drake and The Weeknd to unique breakthrough artists Jazz Cartier and Ruth B, this year’s incredibly talented list of nominees is diverse and inclusive — just like Canada.

Not only do we love to celebrate our homegrown talent, we’re also excited to support the next generation of Canadian musicians. Starting today, when you subscribe to Google Play Music using this link, we’ll donate $1 to MusiCounts.

Celebrating its 20th anniversary this year, MusiCounts is a charitable organization that provides access to music programming and instruments through local schools and communities across Canada. As an added bones, users who subscribe to Google Play Music using this link will get first 4 months for free.

You can learn more about this year’s JUNO Awards nominees and their music here before the awards show on Sunday, April 2nd.

Google today announced a major update for the Google Home app that brings a fresh new design, Matter integration, support for both Wear OS and the web, and plenty of new features. The company said it set out to reimagine Google Home because the number of average connected devices per user has gone up from...
Nehal Malik
2 mins ago