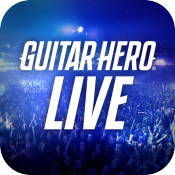 Guitar Hero fans rejoice as Guitar Hero Live for iOS has just hit the App Store as a free download, offering you two songs to play with. Other songs can be unlocked by either buying a $49.99 in-app purchase, or by picking up the $99 iOS bundle, which also includes a MFi Bluetooth guitar and as of now, is only sold through T-Mobile, TouchArcade reports. Best of all, the mobile version is exactly like the console version. You get all the same songs, access to the 200 song live streaming service, and the option to grab the same guitar controller as well.

“Only at T-Mobile can qualified customers purchase the Guitar Hero Live bundle that includes a Bluetooth guitar and a redeemable code to download the mobile game for $0 down + $4.16/23 months and a final payment of $4.31 (FRP: $99.99) with the Un-carrier’s zero-interest financing program”.

The source notes that if own an Apple TV, you can use the game as an AirPlay target and use your iPhone to play the game in the exact same way you would play the console version. “If you don’t care about the guitar, you’ll be able to play the full game for half what you’d be paying on consoles”. Furthermore, the MFi guitar is also supposed to work with the new Apple TV version of the game which will likely launch along side the new Apple TV release.

“We’re still waiting for details on where else you’ll be able to buy the MFi guitar controller aside from directly from T-Mobile, and when it’ll be available… But if I had to guess I’d say Activision is probably waiting to do a big push when the new Apple TV ships next week with Guitar Hero Live getting some prime promotion from Apple as a big-name Apple TV (admittedly, non-exclusive) launch new Apple TV title”.

In the meantime, go ahead and grab Guitar Hero Live for iOS for free using the following App Store link: