If you’ve been closely following the Apple news cycle over the years, you probably are aware of Mark Gurman from 9to5Mac, who’s been spoiling surprises from the iPhone maker with his accurate leaks. 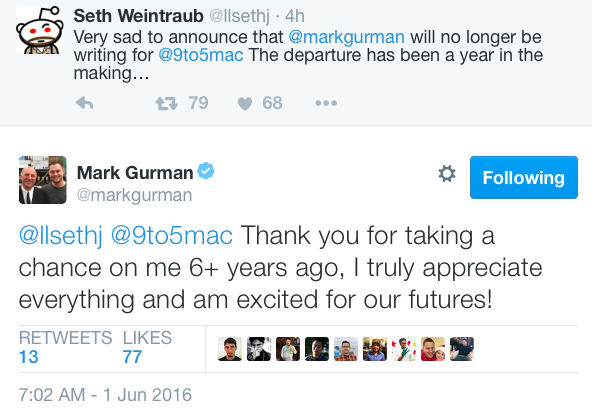 Gurman, who started writing for the publication since he was 15 years old, is ready to move and is heading to work for big name media publication, according to site founder Seth Weintraub, speaking to Tech Insider. The writer recently graduated from college and will be heading to San Francisco to start work—still reporting on Apple news:

But Gurman, now 22, is moving on from 9to5Mac. His last day is Tuesday, Tech Insider has learned.

9to5Mac founder Seth Weintraub told Tech Insider the move from 9to5Mac was “amicable” and “years in the works.”

Gurman has had major scoops, such as uncovering iSlate.com, confirming a tablet was coming from Apple back in 2009, while he’s also leaked news about Siri, iOS 7, the first Retina iMacs, and last year’s 12-inch MacBook before the company’s special events. He’s worked at the publication for over six years, telling 9to5Mac “thank you for taking a chance on me 6+ years ago, I truly appreciate everything and am excited for our futures.”

We’ll most likely still hear leaks about Apple’s future product plans, but they’ll now come from Gurman when he starts his new gig at a larger media company.

According to a memo sent to Bloomberg staff from editor Brad Stone, he will be joining Bloomberg to cover consumer products, including those made by Apple rivals like Google and Amazon.

WhatsApp has finally introduced a new feature that makes it easier to message yourself, by allowing you to send notes, reminders, and shopping lists to yourself for easy access (via TechCrunch). The feature called ‘Message Yourself’ is set to reach all iPhone and Android users in the coming weeks. The feature was previously being tested by select beta users,...
Usman Qureshi
25 mins ago

Apple has shared a handy new tutorial on its YouTube support channel, detailing how iOS 16 lets you use a Memoji sticker as your profile picture in Contacts. You can easily create a Memoji in iOS to match your personality and mood, and then send it in Messages and FaceTime. With a compatible iPhone or iPad...
Usman Qureshi
39 mins ago