The My McD’s app allows McDonald’s customers to place mobile orders for pick up at restaurants, but one Halifax woman named Lauren, isn’t lovin’ it. 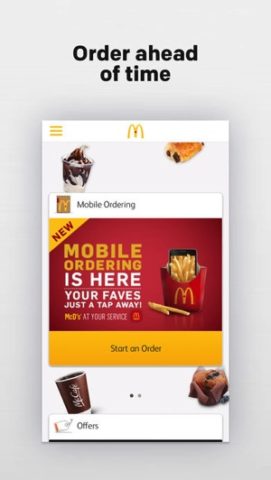 According to City News Toronto, Lauren claims her My McD’s mobile app was hacked, after unauthorized purchases were made at McDonald’s locations in Montreal, and charged to her account, from January 25-29.

The total amount in burgers, friends and more totalled $480 ordered by the mysterious ‘hamburglar’. She didn’t notice the transactions because the notifications only went to her email, which isn’t periodically checked.

Lauren says the timing of the hack was unfortunate, as she needed to pay rent and had recently lost her job. She says the app is “definitely not secure” and it “needs to be better.” Lucky for Lauren, her bank is paying her back the money. She has also filed a report with police, with the investigation ongoing.

McDonald’s Canada, however, says there was no breach with their app, and provided the following statement to City News:

Every day, thousands of Canadians order, collect and pay for McDonald’s food and beverages on their smartphone through the My McD’s app. We take appropriate measures to keep personal information secure, including our app. Just like any other online activity, we recommend that our guests use our app diligently by not sharing passwords with others, creating unique passwords and changing passwords frequently.

Despite reassurances from McDonald’s Canada there was no hack, other customers who allegedly fell victim to unauthorized charges have been voicing their concerns on the fast-food chain’s Facebook page.

One Facebook user by the name of Tracey Creaser, similarly claimed her My McD’s app saw unauthorized purchases at a McDonald’s location “almost 2000km away and charged to my credit card attached to the app.” 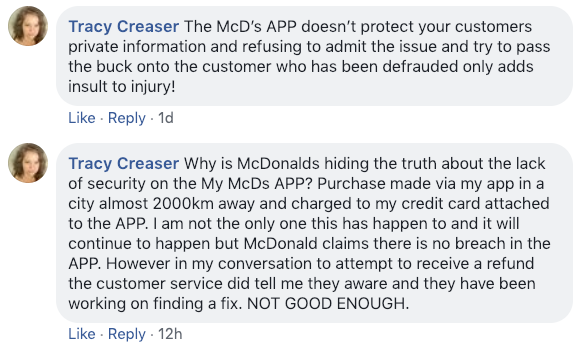 Another fellow, named Harold Hemberger—claims “McDonald’s fails to take responsibly for a data breach in their mobile app.” Mr. Hemberger says three orders of roughly $45 each were ordered through the mobile app and he has emailed receipts to prove them. 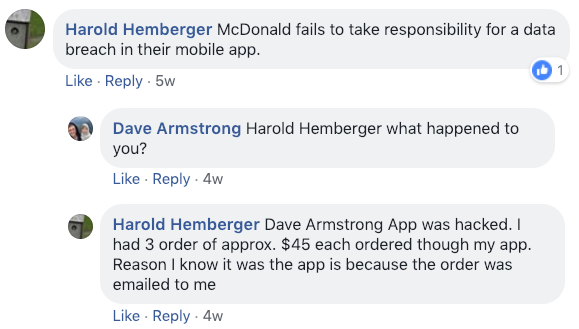 Without knowing all the facts, it sounds like these users may be recycling some of their online logins–which have been compromised on a third party site–and some hacker tried the username and password combination with the My McD’s app–and it worked for an order of 60-piece nuggets and more.

We’ve reached out to McDonald’s Canada for more details and will update this post accordingly.