One particular method to save taxes is via the setup of a subsidiary in Reno, Nevada–where the corporate tax rate is at zero, compared to 8.84% in California. Similar offices have been established in other low-tax havens such as Ireland, the Netherlands, Luxembourg and the British Virgin Islands.

A tax-savings technique Apple has pioneered and other have replicated is called the ‘Double Irish With a Dutch Sandwich’, as described in the follow NYT graphic: 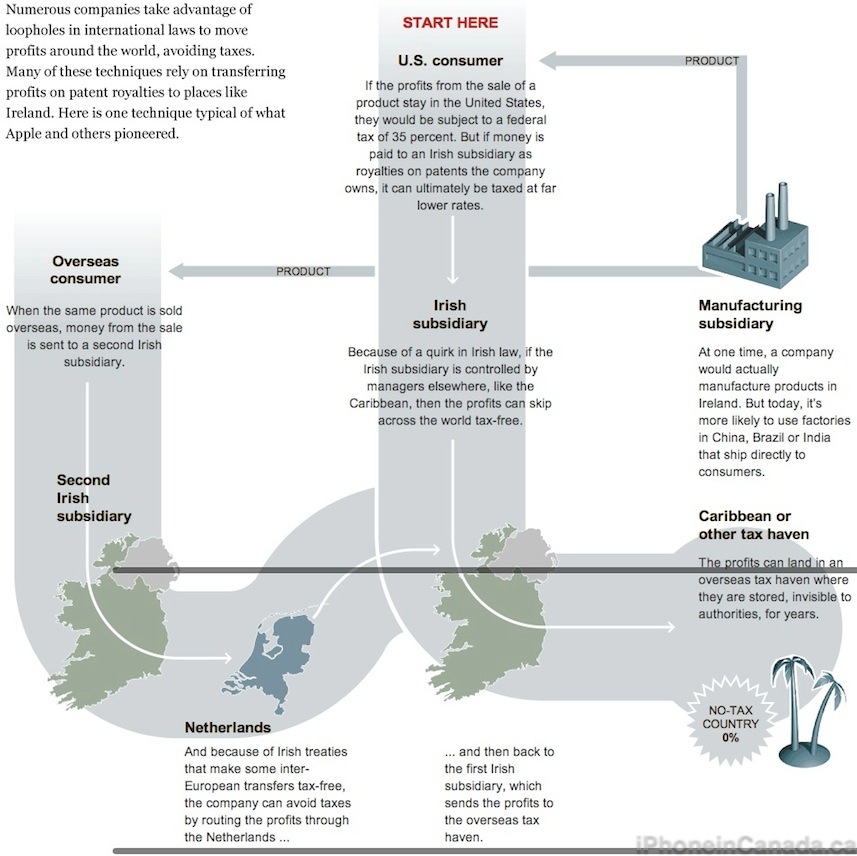 In response to the article, Apple responded to the NYT. They once again reiterated they have created over 47,000 full time employees in the U.S., and the company alone has spurred over 500,000 jobs in other industries. They also had this to say:

Apple also pays an enormous amount of taxes which help our local, state and federal governments. In the first half of fiscal year 2012 our U.S. operations have generated almost $5 billion in federal and state income taxes, including income taxes withheld on employee stock gains, making us among the top payers of U.S. income tax.

We have contributed to many charitable causes but have never sought publicity for doing so. Our focus has been on doing the right thing, not getting credit for it. In 2011, we dramatically expanded the number of deserving organizations we support by initiating a matching gift program for our employees.

Apple has conducted all of its business with the highest of ethical standards, complying with applicable laws and accounting rules. We are incredibly proud of all of Apple’s contributions.

Privately, some executives said it was unfair to criticize the company for reducing its tax bill when thousands of other companies acted similarly. If Apple volunteered to pay more in taxes, it would put itself at a competitive disadvantage, they argued, and do a disservice to its shareholders.

Corporations have used a variety of methods to reduce taxes for years, including overseas solutions. This is nothing new. Apple just reported a record 2012 Q2 with $11.6 billion in net profit and 35.1 million iPhones sold. The company has been put under a microscope, as we’ve previously seen with the constant focus on the working conditions within their supply chain.

You can check out the entire article here.