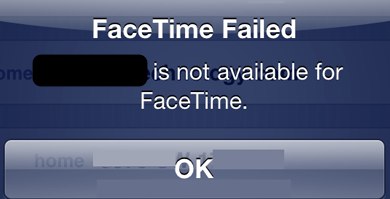 My mother in law just had a milestone birthday and for her present we got her the latest iPod touch. She has been delighted with the simplicity of the device, and it’s been a lot of fun showing her the elegance of iOS 4.

When we tried to FaceTime my iPhone 4, we got the folllwing error message notification:

FaceTime Failed – Gary Ng is not available for FaceTime.

What gives? Turns out the fix to this is very simple–FaceTime was not activated on my iPhone 4. I had recently synced my iPhone 4 with a new installation of Snow Leopard on my OCZ SSD. This deactivated FaceTime, which I assumed was still activated.

So, to fix the “_____” is Not Available for FaceTime Error–just re-enable FaceTime.

On your iPhone, go to Settings > Phone and then turn on FaceTime.

Other times where you might run into this FaceTime error is when you have ported your number or have recently installed carrier settings updates, as stated in this Apple Support document.

After porting your number or installing a carrier settings update and attempting to use FaceTime on iPhone 4, FaceTime may exhibit one or more of the following symptoms:

When you are calling someone on FaceTime, the number on their screen is not your number.
People are unable to initiate a FaceTime call with you.
After installing a new carrier settings update, FaceTime does not activate.

Use iTunes to update to the latest version of iOS for your iPhone.
Disable FaceTime in Settings > Phone and then turn it on again. Do this by sliding the slider off and then on.
Reset All Settings under Settings > General > Reset.

Let me know if you’ve ever encountered this problem.