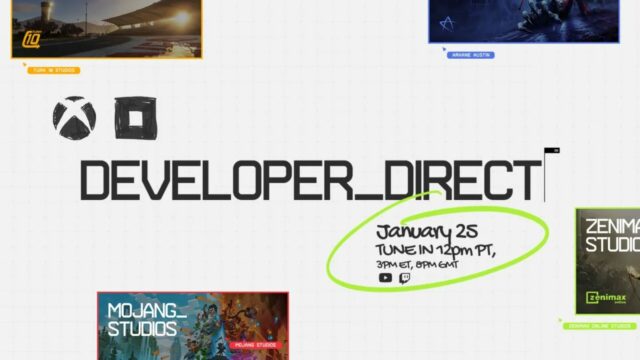 Today, Xbox and Bethesda are hosting their Developer_Direct stream. The first digital showcase of the year from Xbox is said to provide new information and gameplay for a handful of anticipated games arriving on Xbox, PC, and Xbox Game Pass.

Xbox announced the Developer_Direct earlier this month. Setting expectations accordingly, fans can expect to hear from a select number of internal studios and get some updates. Based on what the company has revealed, the Developer_Direct will feature The Elder Scrolls Online, Forza Motorsport, Minecraft Legends, and Redfall. Each game is expected to release “over the next few months” within the Xbox ecosystem. As such, game creators from each studio will be featured including Arkane Austin, Mojang Studios, Turn 10 Studios, and ZeniMax Online Studios.

For instance, Arkane Austin will premier “several new minutes of gameplay” for Redfall. This will include both single-player and multiplayer aspects of the vampire-hunting first-person shooter. Mojang will offer an “insider’s look” into Minecraft Legends, the PvP multiplayer spin-off of the hit IP. Turn 10 is expected to showcase a new look of Forza Motorsport, which is built from the ground up for Xbox Series X/S. Finally, ZeniMax Online Studios’ The Elder Scrolls Online highlights the ESO Chapter Reveal Event, showing the latest regions of Tamriel to come to the game.

Of course, there’s one game in particular that fans have been clamouring for and that is Starfield. Developed by Bethesda Game Studios, the open-world RPG is one of this year’s biggest games from Xbox and Bethesda. However, the companies have confirmed that Starfield will not be in attendance. Instead, Xbox confirms “a standalone show is in the works.”

The Xbox and Bethesda Developer_Direct kicks off at 3 PM ET/12 PM PT. Livestream broadcasts are available on the Xbox’s YouTube, Twitch, and Facebook channels.

Xbox confirms the stream will be hosted in 1080p at 60FPS. For those looking to watch the gameplay in 4K @ 60FPS, a rebroadcast will be available following the livestream. As far as length is concerned, it’s expected to run for 45 minutes. Following the Developer_Direct, the ESO Global Reveal Event will begin at 3:45 PM ET/12:45 PM PT.

Sony is diving back into the virtual reality well with PS VR2 and I for one have been eagerly awaiting this new generation. The original PSVR showed a lot of promise but was held back slightly due to over-encumbering setup solutions and archaic accessories. PS VR2 feels like a fresh start not only for Sony...
Steve Vegvari
4 mins ago