Huawei has been caught in the act of using stock photos and passing them off as having been taken by one of its smartphones — again. 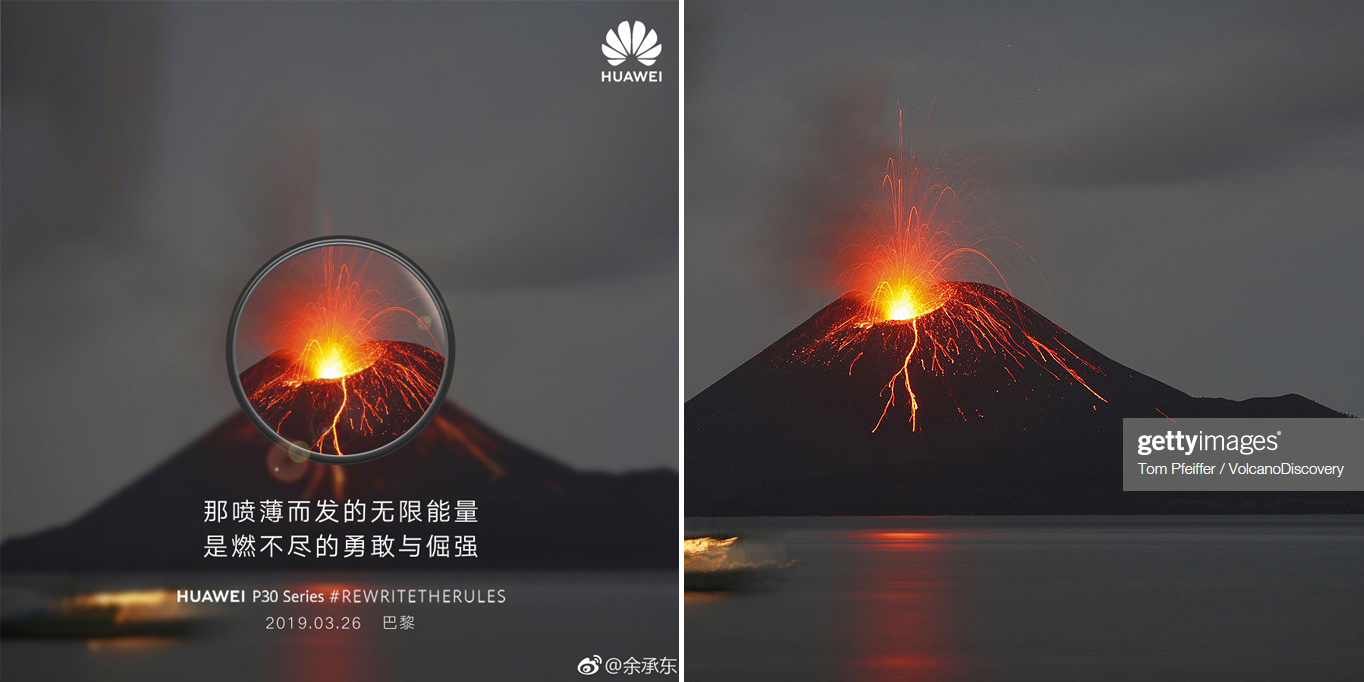 According to a new report from The Verge, new marketing material for Huawei’s upcoming P30 Pro smartphone has been caught trying to pass stock images as photos taken by the product’s camera.

Last Friday, Huawei’s CEO for its consumer business group, Richard Yu, posted a collection of sample images for the upcoming phone through his account on Weibo, the popular social networking service in China. All nine ads hyped up the P30’s camera by featuring individual images presumably taken by the phone and its powerful “periscope zoom” camera.

However, a few users noticed the sample images appeared to be too good to be true. GadgetMatch did a reverse image search which revealed that a photograph featuring a young child with duckling is too similar for comfort to a photo originally from a photographer’s 2009 portfolio. An image of an erupting volcano, meanwhile, turns out to be a stock image from Getty Images.

Having compared the “fake” Huawei P30 sample shots grabbed by GSMAreana with the ones in Richard Yu’s weibo post, it’s safe to say that Huawei updated the pics with a disclaimer *after* being called out. This wouldn’t have been an issue if this was done in the first place. pic.twitter.com/8RmRPFWcIO

What makes this so controversial is that the P30 Pro is expected to include advanced camera features, including four cameras, a periscope-style selfie lens, and 7x zoom — surely Huawei would do well to spend the cash shooting sample images on the device. Alternatively, it’s easy enough to stipulate that the images are simulated and not actually from the device. Given the Chinese company‘s history of faking shots and video footage, it has to expect that some people will scrutinize its images to check their legitimacy.

Huawei provided The Verge with the following statement about the images:

We’ve been made aware that there might have been some misunderstanding regarding our recent HUAWEI P30 Series teaser posters. We would like reiterate that those are, in fact, only teaser posters, and are only intended to hint at the unique new features that will come with the HUAWEI P30 Series. Huawei has acquired the licenses to the original images and the posters are artistic renditions of said features only.

We’d like to take this opportunity to thank the media for their interest in our posters. We have much to announce in the coming weeks. Please stay tuned!