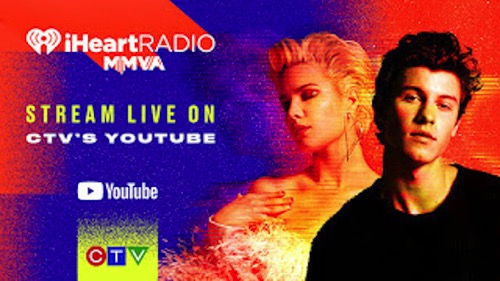 Google Canada has today announced on its official blog that it will be broadcasting the iHeartRadio MMVAs live on YouTube this Sunday night. Live coverage will begin with the pre-game at 7:30 PM ET, the red carpet at 8:00 PM ET and the show at 9:00 PM ET at the CTV YouTube channel.

“Canada’s favourite street party in celebration of the best music videos of the year will be available to fans both at home and around the world on YouTube via the CTV YouTube channel.”

This year’s MMVAs promise to be an incredible party with performances and appearances from the hottest artists, including homegrown stars like Shawn Mendes, Alessia Cara, and Brett Kissel, as well as some international favourites like Meghan Trainor, Marshmello, Anne-Marie, Halsey and 5 Seconds of Summer.

The show will be hosted by Awkwafina, the breakout star of the box office smash Crazy Rich Asians, whose music and comedy career also began on YouTube.

For the full list of performers, presenters, and all the nominees, visit ctv.ca/mmva.