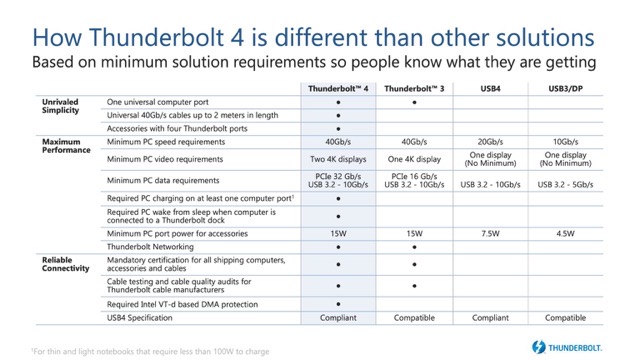 While Intel’s ‘truly universal’ Thunderbolt 4 standard isn’t technically faster than Thunderbolt 3 and offers the same ‘up to 40 gigabit per second speeds,’ it does support PCIe data speeds up to 32 Gb/s, which is twice as fast as before.

Intel says Thunderbolt 4 will offer docks with up to four Thunderbolt ports and universal cables up to 2 meters in length. The standard is also fully compatible with prior generations of Thunderbolt and USB products.

“We expect Thunderbolt 4 products to be an inflection point for accessory makers who depend on PCs and Macs to offer an industry-leading set of product capabilities for a consistent user experience. The advancements in Thunderbolt 4 will help Kensington redefine the modern workspace of the future,” said Ben Thacker, vice president and general manager at Kensington.