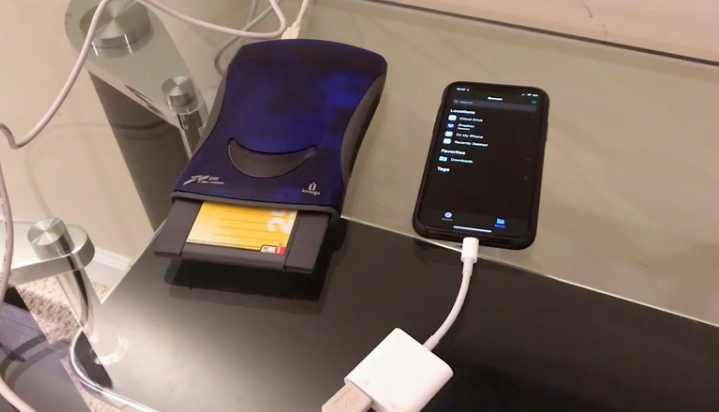 With iOS 13, the Files app finally gets an upgrade to now let you access, manage and organize files on an external drive or file server, directly from the app.

This means you’ll be able to connect USB sticks and hard drives to your iPhone or iPad, using this Lightning to USB 3 Camera Adapter ($49 CAD).

YouTube user ‘napabar’, testing out iOS 13 on his iPhone, demonstrated how it’s possible to connect an old Iomega USB Zip Drive to your iPhone, with full write access available. Zip Drives were popular in the mid-90s and it’s pretty hilarious to see it working on an iPhone in 2019, as these drives are older than kids nowadays.

How does the Zip Drive connect to your iPhone? Just plug it into the USB port in the Lightning to USB 3 Camera Adapter, and the drive will show up within Files.

From here, you’ll be able to navigate the files on your Zip Drive, plus have full write access, meaning you can copy photos or other files over from your iPhone.

There is a caveat, which is there is no eject button in the Files app to pop your disk out. In order to eject, you’ll need to unplug your Zip drive then replug it and hold down the eject button.

Check out the video below to see some nostalgia working with your iPhone in 2019: