During a presentation at its WWDC 2020 conference, Apple has revealed that its upcoming iOS 14 and macOS 11 Big Sur updates will be able to handle encrypted DNS communications i.e. they will support both the DNS-over-HTTPS (DoH) and DNS-over-TLS (DoT) protocols, ZDNet is reporting. 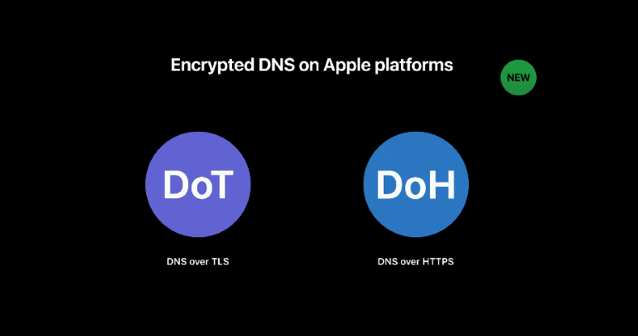 In contrast to normal DNS, both DoH and DoT allow a desktop, phone, or individual app to make DNS queries and receive DNS responses in an encrypted format, a feature that prevents hackers and malicious threat actors from tracking a user’s DNS queries.

Apple says developers can create apps to apply DoH/DoT settings for the entire operating system, to individual apps, or to an app’s selected network requests.

“There are two ways in which encrypted DNS can be enabled,” Tommy Pauly, Internet Technologies Engineer at Apple, said in a talk on Wednesday.

“The second way to enable encrypted DNS is to opt-in directly from an app.”

Apple says it plans to add more new functions and features to its app development frameworks to further improve the privacy of iOS and macOS users.